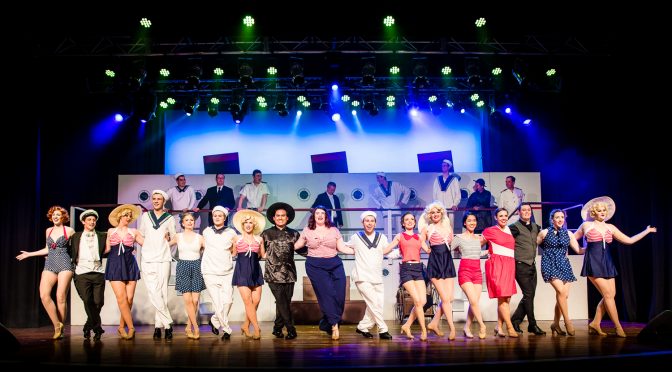 One can feel it coming and you hope it’s good.  As interval approaches at ANYTHING GOES from Hornsby Musical Society, you know that the title song, the show stopper, is up next.  Everything you have seen so far has been really entertaining but this will be the clincher! And, of course, it’s brilliant. Fast and vibrant and highly skilled but there’s something else … something heartstopping. It catches the breath and releases as hands come together in applause.  This is why we do it … this why people make theatre and why audiences attend.  There is such a joy in shared happiness and this is one such moment in a show crafted with care and the love of creation.

ANYTHING GOES is from 1934 with Music and Lyrics by Cole Porter.  We meet Billy Crocker a wide eyed lad learning the brokerage ropes from his boss Elisha J. Whitney.  He’s got a few girls vying for his attention but he has fallen in love with a girl he met in a taxi, Hope.  Much to the annoyance of Reno who misunderstood his friendship feelings toward her.  As he goes to say goodbye to his boss and Reno who are leaving on the same liner to England he sees the mystery girl again and decides to stowaway. Add in a minor gangster, Moonface, and his girl Erma, an English Lord, Oakleigh, and a captain obsessed with celebrity guests and a boat load of hi-jinks is inevitable.

ANYTHING GOES is one of those musicals that rests heavily on the shoulders of its leading lady and Amy Neville is thrillingly fit for task.  In her first solo ‘I Get a Kick Out of You’ Neville brings us a Reno who is sassy and female and bold.  Her high notes are superbly coloured by the lower part of her register and she handles the less sung elements of the song with pinpoint beat and musicality.  It’s genuinely impressive singing backed up with terrific character work.  She belts and cajoles and has enormous engagement with the song and then comes back with the reprise and breaks your heart with the longing and sadness.  And this is before one even sees what a cracker dancer she is, or how she can throw a one-liner with perfection.  It’s a truly enjoyable performance. 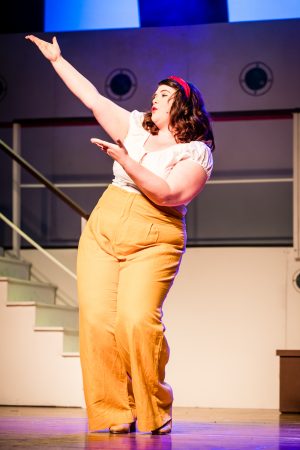 And she’s not the only one with the triple threat chops in this fabulous cast. When she and Billy (Logan McArthur) join forces for ‘You’re the Top’ they have such a nice voice blend … and rapport.  It’s such a familiar tune but these two can sell a song with jazz, freshness and a highly infectious enjoyment, and smooth partner dancing.  You can see the platonics as Reno easily becomes a wingman for Billy.  McArthur also brings a very relatable character to the stage with Billy.  He is not just the handsome leading man in tails and crisp dress shirt but he is the ardent lover and lost little boy too.

As the focus of his desire Erica Penollar gives us a  sweet and conflicted Hope.  Penollar’s acting is neatly sculpted into her voice and dance work, especially in ‘Easy to Love’ where her torn emotions are very clearly expressed.  There’s a dip inside McArthur’s terrific soft shoe that is discreetly telling.  And the directorial choice to trust her, still in a spotlight, for ‘Goodbye, Little Dream, Goodbye’ is very astute as the emotions are beautifully touched by the yearning.
Not that her mother notices.  There’s a whole world of “don’t see, manipulate always” going on in Stefanie Dobbs interpretation which gives rise to some very amusing scenes.  With the hysteria well foiled by Paul Mepham as Whitney who travels his character in a well judged comic arc from imperious businessman to surprising potential husband.

Elizabeth Dobb has created such a lovely comic character in Erma.  There’s a real hutzpah to this example of a modern woman who takes no nonsense in a free spirited, excitable and energetic performance.  And she is well matched with Kris O’Ryan as Moonface in some very funny scenes when he careers from charming to lethal.  David Emerson is great fun as Lord Oakleigh with an accent straight from the show’s P. G. Wodehouse and Guy Bolton book roots, with some hilarious gawky physical comedy and an amusing way with the comedy of his messed up idioms.  ‘The Gypsy in Me‘ is one of the highlights of the second act. 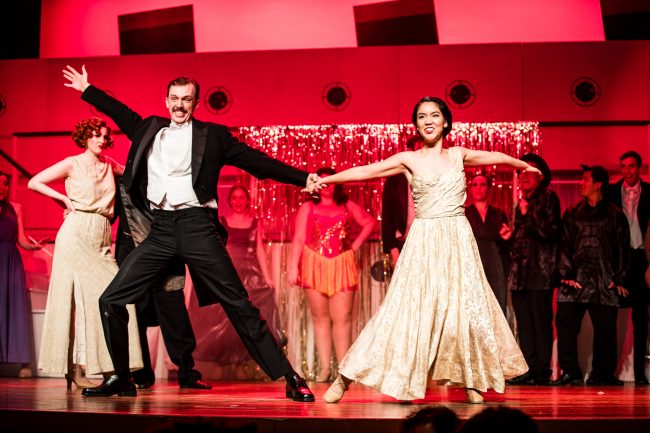 The Ensemble work is also a pleasure to watch.  Quite apart from that stunning number into interval, their first appearance is enchanting too.  When the whole cast sing in a full voiced and stylish rise, during ‘Bon Voyage’ it’s goosebumps time.  And in this scene the cast also have some very well directed business with lots of little stories being told.  The direction by Lauren Oxenham has that kind of detail inside the big production numbers but also has simple and effective relationship work.  Oxenham has also designed the visually interesting choreography for the show and it has a similar depth of artistic choice.  The tap tango is fine viewing and the hornpipe-ish mop work in ‘There’ll Always Be a Lady Fair’ is very pleasing to sweep up in.  I also really loved that French Apache resonance just after interval.

It’s a big band under the hand of Brendan Flanagan with some very surprising and evocative orchestration choices.  I loved the drum hits which added dimension to the brass for ‘You’re the Top’ and the very gentle violin for some scenes changes.  The water warbler for ‘Be Like the Bluebird’  was delightful and the lift of beat with a samba feel for ‘It’s De-Lovely’ was equally  De-lightful.

The lighting colours have been chosen with care. The romantic use of lavender for ‘Easy to Love‘ supports the emotional impetus of the scenes and the orange wash leading into Act 2 was an inspired choice.  Costuming has some very noteworthy long gowns, I loved Hope’s pastel aqua, diamonde touched number.  The bigger numbers also have a cohesive theatricality in their look.  The white polka dots on black matched with the red stripes is just the kind of classic look one wants from this show.

Because ANYTHING GOES is a classic show.  It’s been around for a long time and is always a favourite.  With it’s many well loved and enjoyable songs and a cast brim full of commitment and contagious oomph there’s so much love in the work from Hornsby Musical Society.

A really good night of Musical Theatre, ANYTHING GOES from Hornsby Musical Society [Facebook] is playing at Hornsby RSL until October 14. 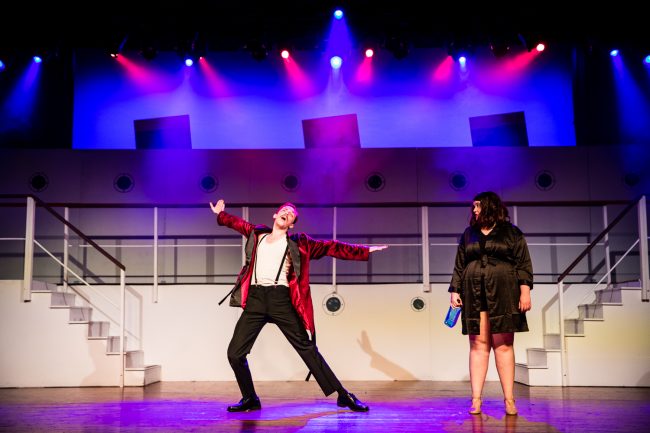