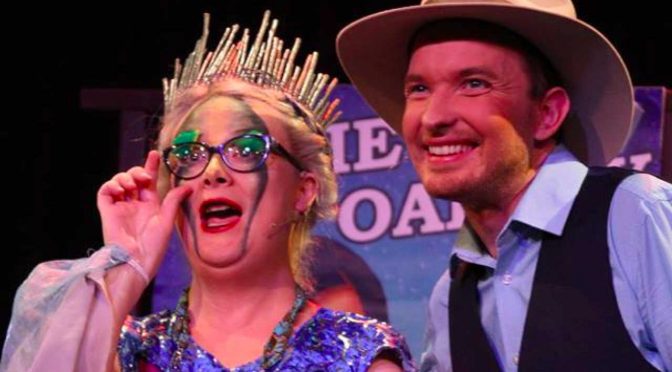 Frank Butler (Clive Hobson) is a tall dashing and suave sharpshooter working in Buffalo Bill’s wild-west show. Annie Oakley (Suzanne Chin) is a backwoods woman, and this feisty country tomboy, is an incredible talent as a markswoman, who immediately falls completely head over heels in love for Frank.

All the songs in this version of ANNIE GET YOUR GUN are winners, indeed a complete pleasure hearing some of my Irving Berlin favourites, delivered by the magnificent voices of the huge ensemble cast, but most especially by both mezzo-soprano Suzanne Chin and baritone Clive Hobson.

This is a classic Broadway musical comedy romance, about mistreatment of North American Indians. For this huge fan of this genre, ANNIE GET YOUR GUN is the quintessential “bigger is better”  Broadway Musical of the 1950s, especially with a woman taking a strong and dominant role.

ANNIE GET YOUR GUN was supposed to be the Peter Stone 1999 revival, a politically corrected re-working of the 1946 musical written by Irving Berlin, a 1800s western-era period piece of historical Americana with North American Indians, and set around the American midwest and in New York City.

However the beauty of some of the original spoken dialogue has been destroyed or lost, by having galactic space aliens instead of redskin indians, and without seeking permission, the text has been altered to include weapons such as laser guns, blasters, disrupters, phasers, as well as space trains, galactic wild-west touring, galactic space aliens, and Star Trek, Star Wars, Gremlins, The Flash, Firefly, and props from those mentioned movies.

Director Emma Sedlak, please remember that “every word in the text is sacred”, and the playwright has to give approval in writing, for every written request to change any of their words.

Ignore the completely unnecessary and very disappointing changes, that take away from this otherwise excellent production, and you will enjoy an evening of magnificent voices.

Eastwood Musical Society’s production of ANNIE GETS YOUR GUN is playing the Eastwood Uniting Church Hall, corner of Hillview Avenue and Lakeside Road, Eastwood until June 3. Friday at 8 pm, Saturday at 1 pm and 7 pm.

Music and Lyrics by IRVING BERLIN
Original Book by HERBERT & DOROTHY FIELDS
As Revised 1999 by PETER STONE
ANNIE GET YOUR GUN IS PRESENTED THROUGH SPECIAL ARRANGEMENT WITH ORiGiN THEATRICAL  http://www.origintheatrical.com.au/
ON BEHALF OF R&H THEATRICALS     http://www.rnh.com/
https://www.facebook.com/RodgersandHammerstein/

“DO NOT make any changes to the text of these works (ANNIE GET YOUR GUN) without first getting permission from ORiGiN Theatrical in writing.”