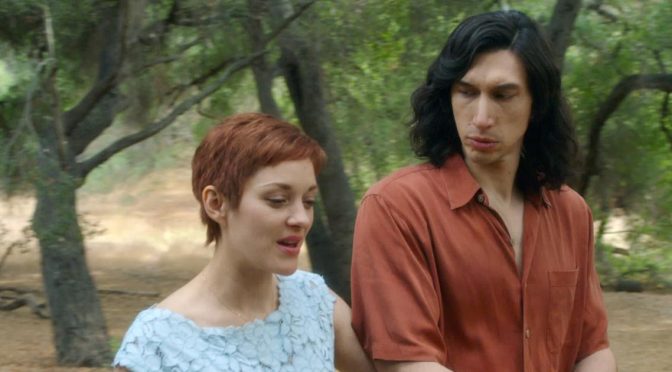 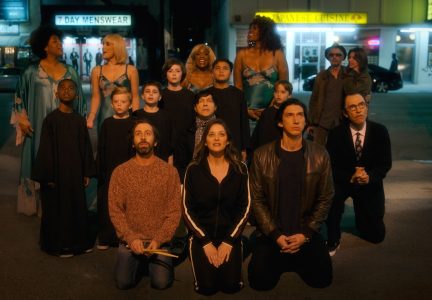 LA LA LAND by way of HOLY MOTORS, a star is torn in ANNETTE, Leos Carax’s rock and sock opera fuelled by music and original story by Ron and Russel Mael, of Sparks.

Beginning with the exuberant choral call to begin, May We Start, we are introduced to Anne and Henry, a dazzling show biz couple. Anne is a celebrated soprano while Henry McHenry is a highly calibrated comedian, a provocative performer who goes under the stage name of The Ape of God.

A pregnancy achieved, parenthood is bestowed, but paternity seems not to sit well on Henry’s self centred soul. The romance unravels, toxic male venom poisons what should have, could have been paradise.

The progeny, Annette, is prodigy, ripe for exploitation by the degenerate progenitor.

Adam Driver continues his ascendant tendency in doing abstract pieces as well as main stream, embracing the brave and audacious and delivering a harrowing performance of a hollowed out humorist.

Marion Cotillard is stunning as Anne, full of grace and mystery, the stupendous beauty to Henry’s beast.

Special mention must also be made of the chillingly emotional presence and performance of Devyn McDowell as Annette.

Florian Sanson’s Production design and cinematography by Caroline Champetier are sumptuous and detailed but the real engine of this movie is the music and lyrics.

A libretto of wondrous wordplay, conversational cadence and rhythmic repetition, matched by a harmonious and sympathetic score, a symphonic, euphoric narrative that encompasses the great emotions of love, jealousy and hate.

Naturalistic yet ethereal, substantive yet spectral, ANNETTE is an operatic fairytale gone devastatingly awry, visually arresting and aurally astounding, a film that taunts and haunts.