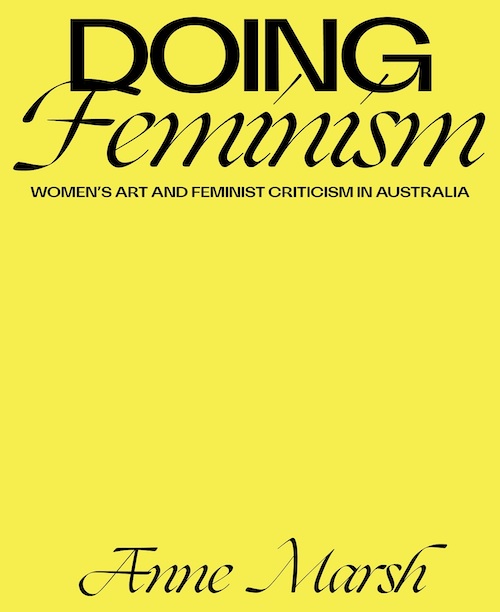 Beautifully presented, lavishly illustrated, this is a very large and heavy tome (3 kilos!) which is also strenuous intellectually. Anne Marsh has coordinated her massive amount of scholarly research (more than five year’s worth) into a most imposing book. I would perhaps suggest that the market for this would probably be university libraries and art galleries..It is divided into two sections , both arranged chronologically by decade from the 1960’s to now. It also includes acknowledgments and a list of abbreviations, a bibliography and index.

The second half of the book includes all the major articles and catalogue quotes etc as mentioned in the first half.

Marsh documents the female artist’s battle for recognition in the patriarchal art world and how their voice was often ignored (and still is in some countries eg Afghanistan with the Taliban). 370 colour illustrations, 220 artists and groups are featured with artist’s statements , critical responses and curatorial essays for assorted exhibitions. Marsh takes the reader though the interconnections of protest, exhibitions, critical and feminist theory and art practice over generations. Politics are important with the anti Vietnam war protests for example and Indigenous people’s struggle for acknowledgement and their great bond with Country.

We learn of the power of women’s art and how it has altered the way women’s art is viewed in the contemporary art world both here in Australia and internationally. Earlier during the 1970’s and 80’s there was the big discussion about ‘is craft art?’ and do textiles ‘count’ as art?. Nowadays there is postfeminism and posthumanism among other labels. Marsh also looks at how nowadays Indigenous art is recognised, and also the inclusion of artists who have emigrated to Australia. As well, the voice of LGBTI women is considered.

The book begins in 1968 which saw The Field exhibition and in the 1970’s with the first International Women’s Year there was also the major Lucy Lippard Power lecture. In 1977 we could visit The Women’s Show and another major exhibition in 1979 The Lovely Motherhood Show.

In particular Marsh looks at the challenging works by Vivienne Binns and Jenny Watson and quotes from horrified reactions of the public and assorted critics, balanced by gallery decisions. In 1967 Vivienne Binns’ first solo exhibition at the Watters Gallery in 1967 was extremely controversial, with critics, public and artists outraged. The reaction to her work took a terrible price on her personal life – Binns stopped painting after the exhibition and turned to work in enamelling, deciding to redefine herself as a craftswoman. Ten years after the exhibition, Vag Dens was bought by the National Gallery of Australia. In 1993 the NGA also purchased her Phallic Monument and Saggon.

Then there is the divisive work of Jenny Watson . In 1993, several years after her 1987 crucial intimately revealing work The Key Painting was publicly rubbished, the tables were turned and Watson represented Australia at the 45th Venice Biennale. Then in 2017 Melbourne’s Heide Museum of Modern Art and Sydney’s MCA both displayed major retrospectives of her work.

There is a lot about feminist theory and how it has changed over the years, the male gaze and exploring and representing the female body and the use of space. Marsh examines the networks of art practice, critical theory, exhibitions and strident protest. Marsh establishes in context the vicissitude and strength of women’s art and the ways in which it has shaped and transformed the art world both internationally and here in Australia. Depending on the decade Marsh is discussing some sculpture, textiles, video/film and performance art are considered interwoven with changes in technology and politics.

Marsh also looks at gender imbalance in artistic representation, for example – how many women have been chosen for the Venice Biennale or other major exhibitions?.How many women have won the Archibald Prize?  We learn that female artists were chosen for only three Venice Biennales during the 1980’s and 90’s (Rosalie Gascoigne in 1982; Jenny Watson in 1993; and a joint exhibition by Emily Kame Kngwarreye, Yvonne Koolmatrie and Judy Watson in 1997). However, since 2001, Australia has been represented by a female artist in eight of the 10 Venice Biennales.

With regards to the Sydney Biennale – for the first one in 1973 only one female artist was displayed and she wasn’t an Aussie!. By 2014 ,though ,women were represented in more than half the exhibition.

Marsh thinks far more needs to be done regarding female artist’s works in collections of the major Australian galleries and also retrospectives – she says that yes male artists have retrospectives but rarely any women.

At the time of writing this review there is a lot of brouhaha regarding Del Kathryn Barton’s The Heartland, a five panel piece that was divided .

DOING FEMINISM is a major comprehensive collection on women and the arts in Australia and will be required reading for years to come.

Part 2 of Know My Name, Australia’s largest exhibition of female artists, opened at the NGA June 2021 and runs until July 2022.