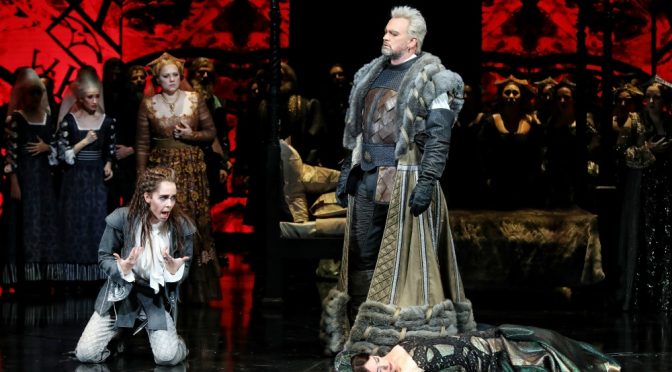 The story of Henry VIII and his many wives is well known but the opera by Donizetti based around Henry’s second wife Anne Boleyn, mother of the eventual Queen Elizabeth I, is not often performed. The reason for its rarity is that the work is extremely challenging for even the most seasoned professionals.

The composer Donizetti had long held the role of composer for the Teatro de San Carlo in Naples where many operas flowed from his quill. There were however major limitations set within that theatre about the content and style of what he could write. So when he nabbed the position of Director for the Royal Theatres of Naples, a role Rossini had before him, Donizetti took advantage of this new freedom to write what he wanted to write. The topic of Henry VIII and the often gruesome stories surrounding his wives had long fascinated Europeans so it was an ideal way to guarantee a sell out. The opera made Donizetti’s name internationally and launched him on to the world stage where he enjoyed many years of celebrity sized success.

The story of Anne Boleyn in this opera challenges the view in history books, offering a more sympathetic perspective. As we know, the victors always write the history books but, what if they had her all wrong? The opera begins at the point where Henry is tired of Anne and is plotting to remove her from the throne. He has already started an affair with her lady-in-waiting Jane Seymour (artistic licence here perhaps) who is keen for the crown but distraught that Anne might get hurt in the process, so she spends the entire show feeling guilty about what she’s got herself into. We follow the events leading up to Anne’s execution.

Opera Australia pulled out all stops in filling this cast with the brightest stars in the business. In the title role of Anne (Anna in Italian) is Albanian born soprano Ermonela Jaho (pronounced Yah-Hoh). A beautiful woman, consummate actor and powerful singer with extraordinary resilience. Believe me, the role is no mean feat. Before her, those famous for this role were Maria Callas, Joan Sutherland and more recently Anna Netrebko. Jaho threw herself into the role filled with raw emotion evolving throughout, beginning slightly disturbed with an air of nobleness, descending into the terror of betrayal and finally to madness as an escape from the destined execution.

Calling the Queen “rival” was Jane Seymour played by Romanian mezzo-soprano Carmen Topciu whose dress seemed to be constantly undone by the lascivious King Henry. Topciu had the most duets with the king and equalled his power, easily able to fill an even bigger theatre than the Sydney Opera House if necessary. An extraordinary voice!

Used and abused was Anne’s first love, the doomed Lord Percy, played by Italian tenor Leonardo Cortellazzi, another powerful voice with a fine vibrato. A difficult role he handled well. Not to be missed and a magnificent discovery for Opera Australia was young Australian Mezzo-Soprano Anna Dowsley playing the love struck servant Mark Smeaton. The superb costumes, which were a modern take on period originals, endowed her with more than just a fabulous voice. Her act developed beautifully from the naive musician in love with his queen, passing through the moment a boy becomes a man when he defends the queen against attack, through to the trauma of torture and acceptance that death is nigh. Dowsley received big applause from an appreciative audience. Also receiving special applause was the pint sized princess Elizabeth – look out for that one.

Regarding the production itself, as mentioned, the costumes and wigs were absolutely outstanding. The scenery is something entirely different though, almost a character in itself. The opera company have been using their high technology LED floor to ceiling panels since the release of Aida last year. They rotate and slide to create boundaries for the performers to work within and around, all the while projecting highly sophisticated moving images as big as something you might see at the IMAX cinema.  Sometimes this highlighted the drama beautifully but often times it upstaged the performers. Some audience members even commented that, at times, they were bewitched by the moving images and forgot the music altogether.  With new technology to play with, I guess the technicians and designers are keen to find how much they can do with these screens and it may simply take a wee while for the music and performers to, once again, come into focus.

Overall, this is an outstanding production. A short season and a rare chance to see what was a worldwide hit when it premiered for Donizetti equipped with lavish costumes, superb chorus and orchestra, plus an unbeatable cast. If you love Romantic era opera, you’ve got to see this production.