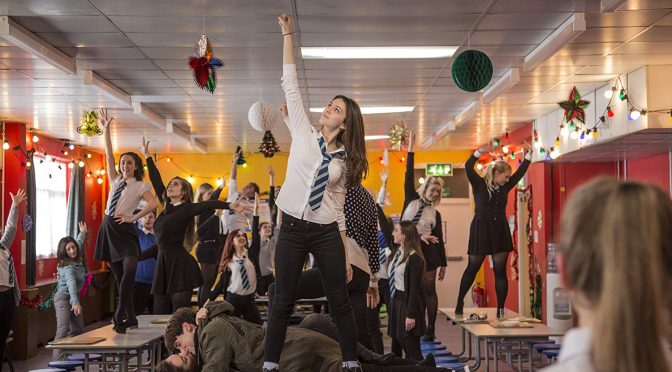 The opening cartoon credits set the scene nicely. We have a scared, sneaking Santa surrounded by zombies … and teenagers. ANNA AND THE APOCALYPSE is a Christmas cracker of great songs, engaging characters and way too many highly inappropriate laughs. It’s one to see with your teenage family because who doesn’t love a zombie, horror, High School Christmas musical?

Anna and best friend John are ignoring her dad, Tony, as they drive with him school. They are in their last year of secondary schooling, distant and disengaged so they change the channel when the news warns of a pandemic. At school they are beset by obnoxious teacher, Savage and school bully, Nick. But they have a bunch of good friends around. Chris and Lisa are in love and socially conscious Steph is destined for journalism if Savage doesn’t kill her spirit.  Nice kids … bffs and besties and chill buddies and it’s all well and good until the zombies arrive.

Prone to breaking into song, all these kids have great voices and a lovely blend and the songs have foottapability, rock roots and relatability. ‘No Such Thing as a Hollywood Ending’ puts both their anxiety and voices on display in the small refectory and mixes it up with terrific choreography (from Sarah Swire who also plays Steph).

It’s not all great dancing though. There’s a marvellous scene where our 2 heroes start out from home after the apocalypse in compete oblivion to the horror around them.  Without a care in the world they skip and slide and hop in a very dance-like-no-one’s-watching mode while the most appallingly comic things happen behind them.

No wonder Mr Savage has a wonderful song that is every worn and weary teacher’s secret rip and tear at their student’s self-absorbed, screen loving, vacuousness. Have I gone too far?  Actually, when I had to stop the film because I was laughing so hard at a very unfortunate baby in a pram incident, that’s when I may have gone OTT.

There are so many hilarious laughs in the film.  Far too many times when I had to stop the preview I was watching to get the hysteria out of my system. Highly suspect laughs in places too, there’s a Christmas icon decapitation that told me more about my relationship to Christmas that I wanted to know.

There’s also some genuine scares and enough gore to satisfy any bloodlust. The zombies… they behave as good zombies should.  Tradition is important. But there’s no shortage of the heartwarming and of home-spun pathos. Some of our plucky characters will fall and sacrifice. It’s Christmas after all. #evacselfie

ANNA AND THE APOCALYPSE, directed by John McPhail and shot by Sara Deane is devoid of any flashy effects.  The blood gushes theatrically rather that CGI-wise.  The film also avoids green in the considerable red, opting instead for fluorescent muted bluish lighting.  Plus … the film has really nice values at its heart.  And other organs.

ANNA AND THE APOCALYPSE from Icon Film Distribution[Facebook] sings and slashes its way into cinemas  November 29, 2018.  Thanks to ICON, we have a merchandise pack up for grabs here. 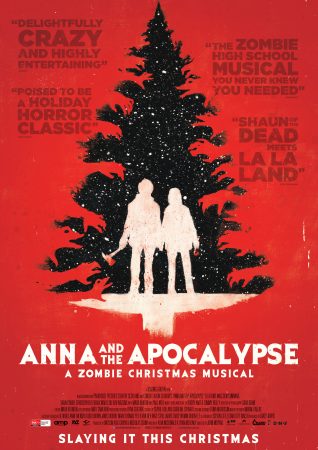