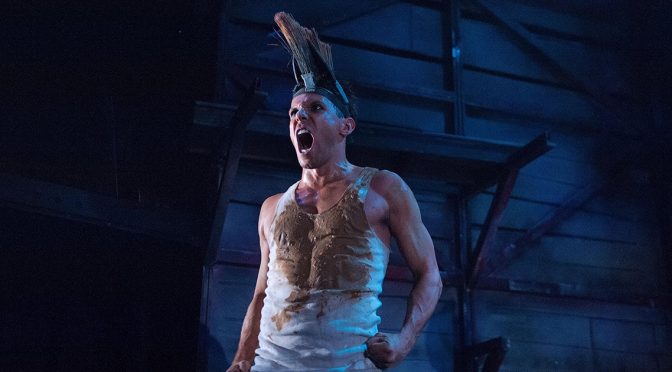 Brisbane’s Shake and Stir Theatre Company is touring its energetic adaptation of George Orwell’s classic, ANIMAL FARM. It’s at the Glen Street Theatre in Belrose until May 2. I went to the 1:00 show hoping there would be school students at the matinee. I was delighted to find about 200 teenage girls as engrossed in the show as I was. At the Q+A afterward, the teens’ questions showed their maturity and knowledge of the classic. I would recommend this engaging production for anyone from 14 years to 100!

After 77 years, Orwell’s allegorical novella still rings alarm bells. It may have been written to echo Stalin’s hijacking of the Russian Revolution, but it certainly resonates with Trump, North Korea and other tyrannical regimes.  A group of farm animals rebel against the farmer in the hopes of creating an equal, free and happy society. There are no surprises when one of the pigs becomes a craven dictator spreading untruths and betraying the ideal to satisfy his need for power. We know from that start how it’s going to end.

Shake and Stir first performed ‘Animal Farm’ in 2011. The company brings it to us again with three new cast members and two of the original cast.  They tell the tale with great physicality. There is much jumping, leaping, crawling and climbing. To mention just a few of the animals the five actors play, Gideon Mzembe was a wonderful horse, Darcy Brown an energetic pig and Tim Dashwood a believable chicken. They all must play many different animals and switch seamlessly. They are not in the costumes of animals, rather a pig ear and a broom for a mane tells you who the animal character is.

The political message is so obvious that the play could concentrate on the entertainment aspect. It’s fun and energetic. The set is excellent. It’s a brave act to  mount a classic that has been adapted in many forms many times. There have been at least two other theatre adaptations,  four or more radio productions, and a comic strip that ran in, unusually,  Brazil and Burma in the 1950s. There is also a musical in development. Shake and Stir has added to the long list of adaptations with something new and engaging.

Glen Street is a terrific theatre space with good acoustics and loads of parking.