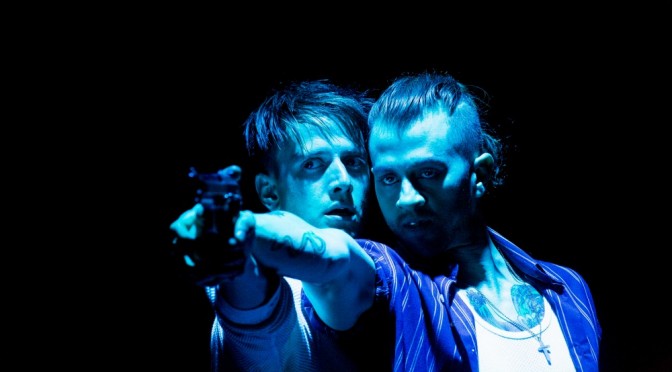 We saw this play the other night.

Quite a bit of Sydney theatre is basically elegant pap. Or noisy chaotic pap presented as high drama. Or where actor and director are in an embrace of mutual congratulation and admiration, the audience almost irrelevant….mere observers.

One often goes to the theatre like a prospector hoping that at the end of the day there, at the bottom of the pan will be a speck or two of gold or even a nugget.

A little while ago Cat and Dog, also at Belvoir. This was a nugget joyously celebrated and reflected on, even months after,

This play too is a nugget. But it is a black dark gold. Violence, greed and evil cut knife deep into our viscera and marrow. Parts of this play seized me with such fear that I was compelled to look  away. But make no mistake. This is a play directed and acted with passion, honesty and genius.

Tom Conroy plays Jimmy, a happy young man from the suburbs of Sydney. He is soft and cute and boyish and loved by all. But in almost a moment his life changes irrevocably. Like an alligator and its prey the tentacles of a drug cartel seize and drag him relentlessly into its vortex. At the centre of a black hole he loses all sense of integrity and self worth, his sex and his inner core degraded and traduced. Finally death comes to him as a release.

Colin Friels plays a multiplicity of roles. One of which is Detective Grubbe, his duplicity warping Jimmy’s reality and sense of self.

Renato Mosolino plays Monte, the capitalist interface between drugs and death..remorseless and manipulative.

David Valencia is El Gallito, a deadly drug thug whose greed and venom and rapacious sexuality is real and palpable.

To add complexity and nightmare the play takes place against a  backdrop of black magic and witchcraft which is set at the very beginning of the play.

MORTIDO has been written by Angela Betzian a multi award winning Argentinian Australian, and as is so often the case with her plays, is directed by Laticia Caceres. Laticia does a superb job. Violence on stage is so often confected histrionics and tomato sauce red blood. Not in this production!

Great theatre is wonderful no matter what the content. It can be funny or sad. Or frighten the life out of you. Theatre that does so as authentically as this is rare.

A co-production with the State Theatre Of South Australia, Angela Betzian’s MORTIDO is playing upstairs at Belvoir Street theatre until 17th December.