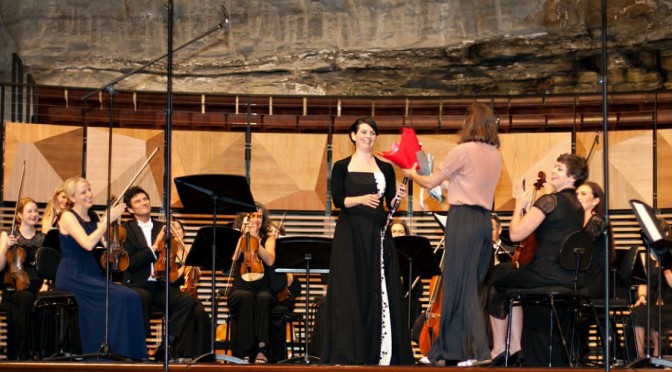 The evening’s program consisted of three pieces:  The Creatures of Prometheus (Beethoven), Concerto No 1 for Flute and Orchestra in G Major (Mozart) and the very long Symphony in C Major (Schubert); that is, from an orchestral development point of view, Beethoven, pre-Beethoven and post-Beethoven.

The Prometheus set the scene for the concert by laying out the orchestral genius of Beethoven for all to see. It was interesting to hear the difference that the softer tone of the woodwinds in particular makes to the piece. We are so used to the more piercing and brighter sound of modern flutes etc that we have perhaps lost our appreciation of the softer, more romantic and pastoral tone that inspired earlier composers.

The flute soloist for the Mozart Concerto was Georgia Browne. Her skill on the more demanding older instrument was astounding. However, in the acoustics of the New Hall, set for more modern instruments I presume, you had to really focus to hear every note above the orchestra. Nevertheless, this was a really enjoyable performance from her and the orchestra. The harpsichord added to the blend of this work to recreate the feel of the era and the polished and elegant orchestral style we associate with Mozart. I loved the design and decoration of the harpsichord and would have appreciated a bit of information about the instrument in the program notes.

The final piece, Symphony in C Major, where each movement is almost a work on its own, was a genuine test of stamina for the orchestra and the older style of instruments and demonstrated very clearly how orchestral music changed between the Baroque and Classical periods, hugely influenced by Beethoven and others.

The first movement embedded us in the early 19th century Viennese style of which it was a prime example. It made me think of Sachertorte, – elegant and simple on the outside, but sumptuously rich on the inside. The second movement gave the trombone players a chance to showcase their skills and demonstrate the beautiful sound of this instrument when it is well-played.

The delights continued with the beautiful use of the woodwinds, newly appreciated because of their ‘old’ sound. I really loved the softer sound of the ‘wooden’ woodwinds, especially the oboe, in these sections. The final movement is full of reminders of Beethoven in its style and really illustrates the extent to which Beethoven changed orchestral music. The whole symphony made me imagine riding through the Vienna Woods in summer.

Altogether a really enjoyable evening, although it would be nice if they dimmed the house lights so that they did not shine in the audience’s eyes throughout the performance. I look forward to attending more concerts from Orchestra seventeen88 and learning more about how music from the great classical tradition of Europe was originally heard and played.