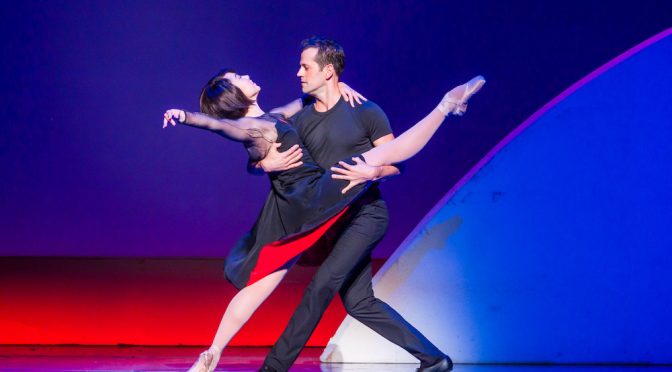 Let me tell you a story.

Some years ago, I worked for the Commonwealth Department Of Defence. I am sure that the then Minister for Defence felt that the country was in safe hands with people like me working in the Department!

Anyhow I used to have to report to the Manager Of Corporate Services. Outside would sit his secretary Leanne. We had this running joke. I would tell her, ‘I have a dancer’s body’ and she would reply, ‘Where did you put it?’

Five of the Australian Ballet’s dancers are are participating in Christopher Weldon’s current production of AN AMERICAN IN PARIS which is now playing at the Theatre Royal.  Two of the AB’s dancers, Dmity Azoury and Cameron Holmes are the alternate casts for the lead roles.

Try and get to see this production. It is exhilarating. The storyline of the artistic community  getting back on its feet after the end of the Nazi occupation of Paris, during which at what time Hitler threatened to blow up the city centre, is intriguing enough, but its the music and the dancing that are the features of this show.

Robbie Fairchild and Leanne Cope  are exceptional as the leading characters, Jerry Mulligan and Lise Dassin.

The ensemble cast, way too many to mention,  are also excellent

Amongst the show’s team helmed by director and choreographer Christopher Wheeldon, Bob Crowley’s set and costume design is  the big star with the outrageously good sets and costumes.

The show received a standing ovation. As we were leaving the theatre, some people had left their programs on their seats. I grabbed  a few extra programs to pass on to friends.

My friend and I caught the train home from Martin Place to Bondi Junction. A woman was standing in the carriage vestibule and was carrying about five programs in her hands and had the same idea.

We started chatting. She told me that this was the eighth time that she had seen the show. I asked, ‘how is this possible?’. ‘It’s only just started its Sydney season,. she replied, ”I’m from Brisbane. I’ve seen the show in Brisbane and in Melbourne. Now I’ve some to Sydney. I figure that I’m not getting any younger and I might never see a show as good as this again, so I’m seeing it as often as I can.’

Yes, it is that kind of a show. AN AMERICAN IN PARIS is now playing at Sydney’s Theatre Royal until Sunday 12th June 2022.