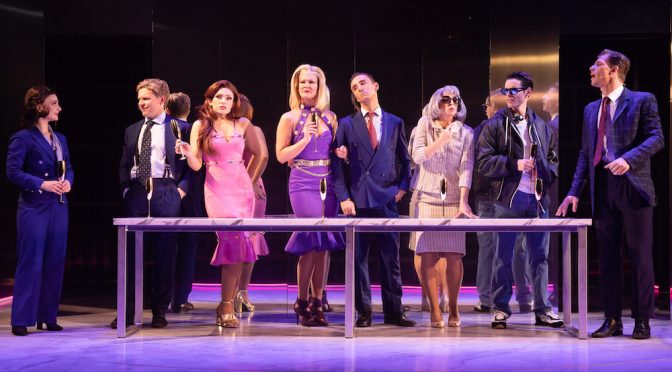 This show comes from a rich legacy, over several mediums and decades. Its precise execution benefits from a cast well warmed from the earlier 2019 production at the Hayes Theatre Sydney. This was directed by Alexander Berlage who also directs the Opera House season. It is good to see a show being remounted especially in the same city. The musical premiered in London in 2013, with a New York production following in 2016.

The musical features quick ensemble work centring on the highly theatrical character of Patrick Bateman, played at the Sydney Opera House with the precision of a razor blade and presence of an axe by Ben Gerrard. Before that there was the film, which used cinematic language of slow pans, crisp sets and closeups to create formidable emotions and terror. Finally there was the book by Brett Elliss. The last two works have been surrounded even mired by controversy for the unapologetic depiction of violence, at the hands of Patrick as a serial killer. The book was banned in Germany, of all places.

I decided to avoid the film, so am left with first impressions about what to make of this work and narrative. As a production, one must love it. It is rich, polished, clever, fast and highly entertaining. There is much to learn about scene change, dialogue delivery, and musical theatre, in the use of a rotating stage and light rimmed glass partitioned screens that moved incessantly on the set (Isabel Hudson) throughout the performance. Every scene was displaced no sooner than it commenced. It was less a case of scenes having transitions as it was that transitions were the scenes. The style was a fit representation of upmarket consumerism and faddism typifying the New York young financial groupies that are the show’s characters.

In both acts a collection of 80’s cover and original songs, and enlivened and accomplished tracks (Nicholas Walker), help stage a plethora of 23 items (Andrew Worboys) and it seems many more scenes. The cover songs tended to overshadow original songs. There was a small problem with diction, in places especially by the lead (including the very opening). This might be caused by sound balance.

The cast must be delighted to share in such a performance opportunity, but it is a pleasure that involves some serious hard and precise work on stage. The females were particularly strong – Angelique Cassimates, Erin Clare, Shannon Dooley, Amy Hack and Kristina McNamara. The singing, by all cast members, was of a very high standard and a pleasure to hear. Some songs and dialogue are solo – including a soliloquy at the end by Patrick delivered in front of stage and partly to the audience who can be seen, lit up, on the glass wall on stage. Mostly however the stage is a moving, glamorous catwalk of deadly sins that outnumber the seven of christian tradition – lust, greed, sloth, wrath, pride, and a whole lot more are on display with prostitution, and rampant sex, holiday hedonism, drugs, intrigue, indulgent fashion, vanity and over consumption. This is a show that Bertold Brecht would be proud of – a gloves off attack on the excesses of capitalism that uses fantasy to score its ideology. After all, the show is titled as American.

None of Patrick’s male friends – busily and well played by Mark Hill, Liam Nunan, Daniel Raso, Tom Sharah and Jason Winston – deserve any sympathy, the satire is so savage. Why then weigh down a wide reaching depiction of systemic loss of identity, feelings and values in contemporary society, by the particular excesses of Patrick’s serial killing habit. The answer is, the show doesn’t do this, neither does, I gather, the film. It depicts and relishes blood and gruesome body dismembering but in the end wipes these crimes clean. The film. I gather, suggests the possibility that the crimes were dreams. As the show developed in the second act this seemed to be the case. The stage was full of mannequins, ghouls, deceased, tawdry advertising images, prostitutes – these states along with Patrick’s dreams are metaphors for the spiritual death at the heart of modern commercial society.

The problem is, if the movie left a way out for the crimes, in sleep, the musical is less clear. Instead of ambiguity, confusion can be felt at its end, something that takes away from the coherence and impact of the show to popular audiences. What is the show? A moral fable, a psychodrama or horror melodrama? Further, when all is said, and whatever disclaimers might be made to content, the novel, film and musical talk and act out a lot about violent serial kiting acts. On stage, at the end of Act One, an axe and virtual blood was hurled at the audience (interceded by a dropped screen). Is this ok? Is it ok to represent and make musicals out of such content, exploring it for theatrical effect (I know movies do it all the time – but that is a different medium, in ways that cannot be considered here)? What next – Harvey? Milat the Musical? Bundy on Stage? What is the difference between this show and Sondheim’s ‘Sweeney Todd’? If the crimes are not real, then the main characters are truly mentally unwell, and who wants to spend an evening with dreams of decapitation and dismembered bodies in the fridge? Or is the novelist, the prime instigator of the American Psycho narrative, implicitly satirising the audience who are willing to accept ribald tellings of aberrance?!

There seemed no confusion in the young opening night audience, many of whom cashed in on the legacy of the film. They loved the familiar generational nuance (often insincere) of gestures and interaction, enabled by the busy capable choreography of Yvette Lee and the director. They were probably not too concerned about the slightly faded post Mike Douglas ‘Wall Stree’t genre, or even any morals it might or might not imbue. This is the generation brought up on video games. As with ‘Hamilton’ character and plot is secondary to the theatrical anime spectacle. The flashing lights, moving set, stylised action, plastic figures and yes, violence, could all be digitally mapped – if not as a full length whole, then as a series of disconnected dance music videos.

Thus the staging, in particular that at the Opera House, in part compensates for and overrides structural problems in the narrative through eye candy slick theatrical realization. This might work for the young and theatre fans – whether it convinces the general theatre going public is another question.

The lighting was a fiesta (also by Alexander Berlage) of movement and colour, to match the show. Visually the piece is a delight, with costumes by Mason Browne and wigs by Nick Eynaud. Above all, this whole complex realization was directed in deft and inspiring detail by Alexander Berlage.

It will be interesting to see how wider audiences respond to this deserving, well crafted and developed show during its forthcoming tour.

AMERICAN PSYCHO : THE MUSICAL is playing the Playhouse at the Sydney Opera House until 27 June 2021.