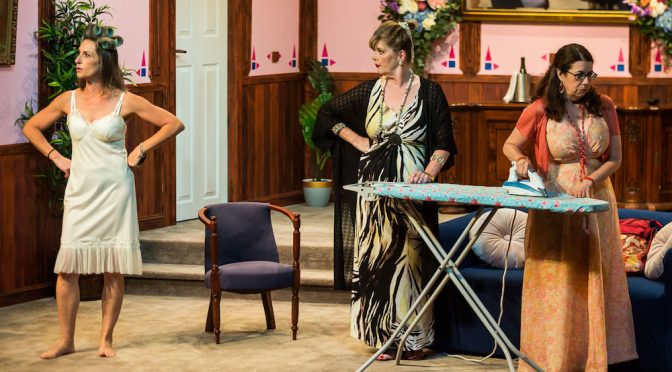 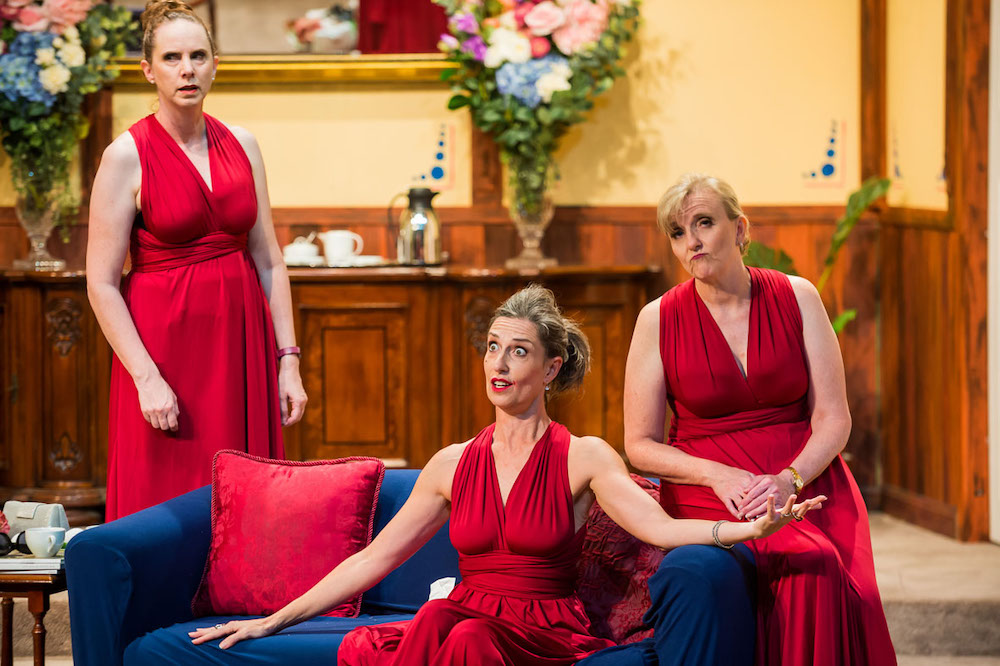 As a single woman in her later middle age I admit I headed to watch this show with some hesitation in my mind fearing I was letting myself in for some rather trite, stereotyped characters. I was however, very soon converted, and sat back engaging with these interesting women’s stories as their deep friendship survived over the years despite differences of opinion and outlook and some hilarious calamities. I’ll also say up front it’s not just a play for women, sitting not far from me was a young man in his early 20s thoroughly enjoying himself and laughing with the rest of the audience at some very witty, clever one-liners.

In this romantic comedy, written by the team of Jessie Jones, Nicholas Hope and Jamie Wooten is the second play in Castle Hill Players’ 2021 season. Four friends have promised to keep the vow they made at their senior prom – to be at each other’s weddings. After thirty years they are still fulfilling this promise with a mixture of funny, ridiculous and touching moments.

The play is made up of a series of scenes, almost like the episodes of a TV sitcom, where each scene highlights a particular character’s wedding. The group of actors work beautifully together and the costumes are quite extraordinary at times, bringing peals of laughter from the audience.

Libby Ruth, played gently by Gina Wilson, is the sensible one of the group, rather maternal, believing, despite all evidence to the contrary, that her friends can find the same happiness as she has in her marriage.

Monette Gentry, played by Meredith Jacobs, is the seemingly serial bride of the bunch. In her flashy, self-involved manner she continually tests her friends’ love and patience with all-too-frequent trips down the aisle.

Charlie Collins, played by Leigh Scanlon,  is the friend who is into sensible shorts and flat shoes rather than gowns and heels. She doesn’t want love to come unexpectedly – she would prefer “Thursday at 8pm”. Marriage is not her goal and she panics, in outrageous style, when her turn does come around.

Deedra Wingate, played by Penny Johnson,  is the friend with an important career and apparently solid marriage. She is described initially, by one of her friends, as having “a reptilian kind of warmth” But things change radically – it’s quite a story.

The delightful set is a sitting room in a historic reception venue, Laurelton Oaks. It is run by the rather formidable Sedalia Ellicott, played by Annette Snars. She is a serious businesswoman who insists on things going her own way, even if this necessitates the use of an axe! She does, however, offer a loyalty discount for repeat wedding clients!

Rounding out the cast, and linking the scenes, is Kari Ames-Bissette, played by Chantal Vavasour, a sweet and sassy young bride with lots to say at her reception. Thanks to a champagne flute with numerous refills her revelations escalate as the night progresses.

Directed by Meredith Jacobs who draws these talented actors together in a fun filled romp,

ALWAYS A BRIDESMAID is about friendship, love and “fashion”. I left the theatre with a smile on my lips chatting with my companions about some of the show’s funniest moments.

The show is playing the Pavilion Theatre in the Hills Showground, Doran Drive, Castle Hill until Saturday May 1.

Performances are Wednesdays, Fridays and Saturdays at 8.15pm and Sundays at 4.30pm .