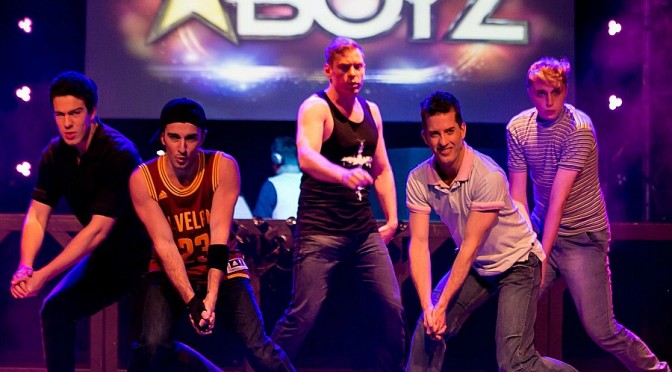 ALTAR BOYZ tells the story of five small-town boys – Matthew, Mark, Luke, Juan and Abraham – trying to save the world, one screaming fan at a time. The musical is presented in real time as the final concert of their national “Raise the Praise” tour.

Four of the group Matthew (Gareth Davis), Mark (Tim Wotherspoon), Luke (James Jonathon) and Juan (Sasha Simic), are Catholic while the fifth member Abraham (Gus Noakes) is Jewish. This dynamic adds to the humour and developing story within the musical.

Through the  show the band members address the audience directly. The concert venue and references have been changed from New York to down-town Sutherland.

On opening night, with the reactions of the very enthusiastic and supportive audience, it really felt like being present at a big concert. There was even a little audience participation with one patron being brought onto the stage.

As part of the story each of these talented actors has the chance to perform solo work. Particularly impressive was the work by James Jonathon and Tim Wotherspoon.

The demanding choreography by Craig Nhobbs is performed with skill, energy and excellent timing backed by a lively small band with musical direction by Joshua Ransom.

During the show, the Altar Boyz repeatedly turn to a TV display screen, the “Soul Sensor”, that they explain shows the number of burdened souls in the theatre. Their goal is to reduce the number on the machine to zero by the end of the concert.

A highly effective backdrop to the musical is an ongoing series of projections on a large screen highlighting the action on stage– from swirling designs of light and happiness, to a gentle cartoon of miracles and a dark scene of hell. Credit to the great work by AV designer Adam Ring.

As with  all live concerts there were impressive light changes wrung by lighting designer Tim Dennis.

2 thoughts on “Altar Boyz @ The Sutherland Memorial School Of Arts”