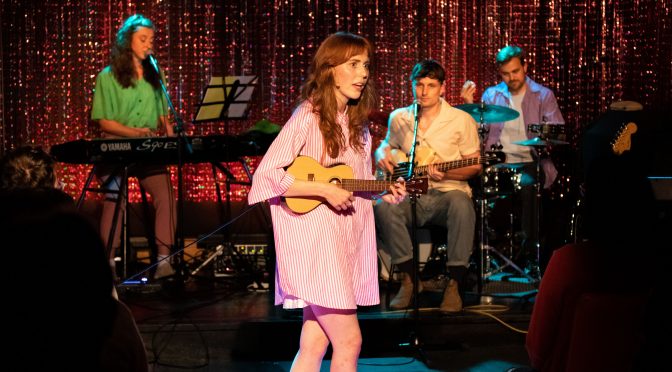 It was great to catch up with the last performance of singer songwriter Ally Morgan’s show NOT TODAY at the Bordello Room, which has been converted into an intimate theatre space, at the Kings Cross Hotel. The show was performed as part of the Rogues 2021 KXT POPUPSTAIRS program.

Ally had a warm, sweet stage presence as she presented stories from her life via a dozen of her songs. The songs were poetic and she had a good singing voice. There was plenty of chit chat between the songs which she performed either on guitar or keyboards. She was backed by a small band; another keyboard player, a drummer and another guitarist. I haven’t been able to source their names.

The chit chat with the audience displayed her gentle, anarchic humour.

There were a few through-lines; the intermittent dialogue that she has with her psychologist, her day job which is to be an entertainer to sick kids at hospital, her attempts to fix the world’s climate change problems, and the angst she feels about her, and for that matter, everyone’s mortality.

The show’s title ‘Not Today’ refers to her final song which is her reconciliation with mortality song. During the show she spoke about a young boy in her hospital work who she grew close to, who sadly died. In the song ‘Not Today’ she sings ‘yes, we all die sometime’ but celebrates that we are definitely not going to die today!

The performance was oddly billed in its publicity as being a show about a young woman coming to terms with her sexual identity. Ally told us she has accepted her fluid sexuality and that at the moment she was in a happy relationship with her male guitarist. One could sensel the loving vibes between them.

I loved this tiny little show! Ally, may your light continue to shine and grow in the future!

An intimate cabaret experience, Not Today is a frank, funny, and emotion-charged song cycle about a queer young woman trying to make the most of her life, while she can. Featuring an entirely original score, it’s a bumpy ride through life as a not-yet-famous 26-year-old.

The song cycle features twelve of Ally’s smart, fun, and insightful pieces, including the titular “Not Today”. Join us for this young queer woman’s story as she comes to terms with her sexuality, climate anxiety, and her own mortality.