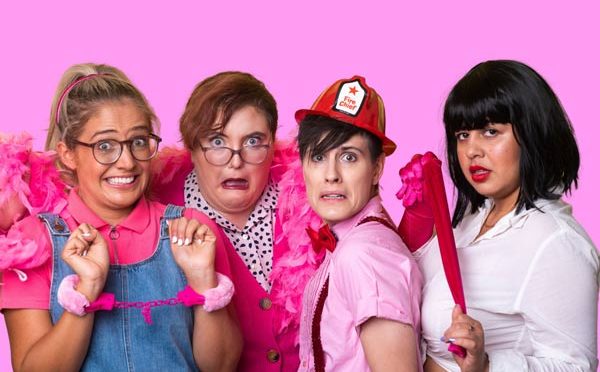 For a saucy fun night with a few Sydney-based Drag Kings, go to The Giant Dwarf to see ‘All the King’s Hens’. On the first night many enthusiastic audience members left saying “so good”, “amazing” and “love it”. This was despite the fact that a full first act clearly telegraphed what was likely to happen after the interval.

Co-creator Anna Gambrill draws on several years of experience working in a hens party company to create an agency and throws its door open to review the traditions, gender roles, love and sense of self behind marriage rituals. This agency has a set of a two panel backdrop, keyboard and a few chairs making this comedic cabaret easy to transport. It also signals that this is not an up-market outfit.

It transpires early in the show that Magic Mike is in town so people and performers are cancelling events, especially those for this events agency. Plus the feared boss, who never appears, has a serious gambling problem. These two factors are endangering the viability of the agency and everyone’s jobs.

All four performers sing solos as well as contributing to duets and medleys as part of the original music. We are introduced to the four people who work for the agency in the first act. There is an informative medley about the history of marriage providing some historical context. It appears that the agency planning hens’ parties is bound by historical context.

All four performers show strength and stamina as they sing, dance and act crossing gender roles. Anna Gambrill is co-creator, musical director, major keyboard player as well as playing amenable corporate escapee Andy and Drew. Laura Hart is co-creator and director as well as playing the older monogamous Jan and later James. Natalie Caro as flirtatious go-getting Charlie drives home the bitchiness of the ‘show biz’ of events and later MCs the drag show with her whip smart cowboy Charles.

Jordan Stam as Olivia, the naive zoology student, gives us a high energy delivery of a lesson about animal sex in a funny, well choreographed song. This energy is mellowed later in a duet with Anna Gambrill as Andy with poignant lyrics about being ‘afraid to change…scared to stay the same’. Her youthful enthusiasm reappears after interval in her role as Oliver.

The drag show after the interval is predictable and corny but the audience, becoming the agency clients, is aware that they cannot expect more than that. However this is the charm of the performance. It is loud and raunchy with audience participation onstage as well as loud cheers and clapping. Daddy Charles’s choreography provides sufficient variety to keep the audience engaged. Whilst each character entertained, highlights included Charles’s (Natalie Caro) six-plus-pack, James (Laura Hart) singing ‘I don’t want anybody else’ and Drew (Anna Gambrill) flaunting a colourful piece of merchandise. At the end of the drag show they showed exhaustion. After a full first act, a raunchy show within a show in the second, the ending felt a bit abrupt but then maybe many acts are like that!

In the drag show the performers were only amateurs, but their musicality, energy and comic timing throughout the whole performance revealed they are professionals. A few sound glitches and an error here or there did not detract overall from the show debuting at the Giant Dwarf. Despite their blurb, All the King’s Hens, does not need to label themselves “the queer Magic Mike”. They don’t need the comparison. They can stand loud and proud.

Laura Hart has said: “I want to show how entertaining Drag Kings can be. It’s an all singing, all dancing camp musical show with something for everyone”. How true!

On another note, Anna Gambrill and Laura Hart are the principals of a business, @2kingscreative, which seeks to further theatrical and event opportunities for LGBTQIA+ talent.