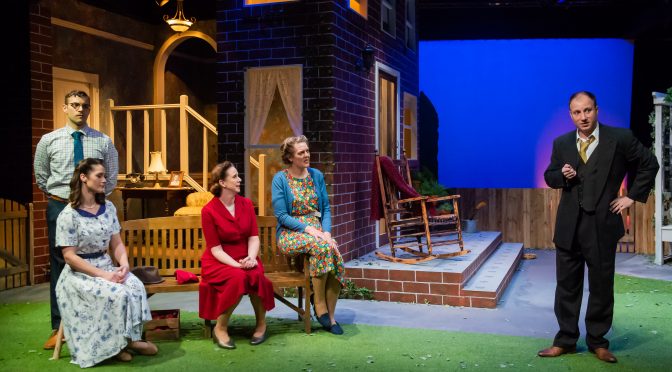 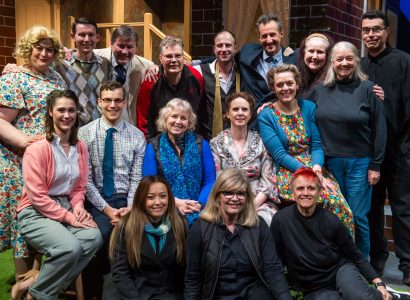 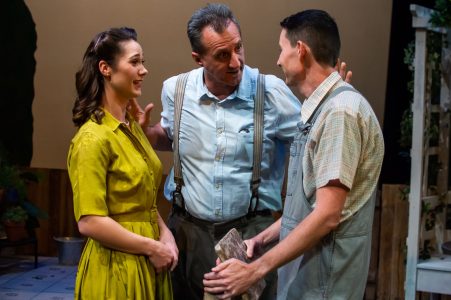 In yet another top-class production from Castle Hill Players, Jan Mahony’s direction of Arthur Miller’s All My Sons, presents us with a moving and tragic portrayal of a man fighting the demons of his past and the enormous consequences on his family.

ALL MY SONS carries with it repercussions of World War II, when suspicion and guilt followed those men who stayed behind and profited from their work and were not called upon to pay the ultimate price for their country.

Dave Went is masterful in his portrayal of Joe Keller, a Midwestern factory owner who barely escaped being imprisoned after his company produced defective cylinder heads during World War II, resulting in the deaths of 21 American pilots. His ability to lie and laugh masks a simmering tension which ultimately cracks.

Leigh Scanlon is equally powerful in her role as his wife Kate who appears slightly neurotic and almost fragile at times. She is desperately holding onto the belief her son Larry is still alive more than 3 years after his disappearance in the war.

Julian Floriana is excellent in the role of Chris Keller, the other son, who is certain his brother is dead and is in love with Larry’s former girlfriend Ann but is caught in the web of suspicion about his father and his own growing doubts about what really happened.

Nicole Harwood appears sweet, yet is also a very strong woman and is the daughter of Joe’s business partner, who was tried and convicted for the crime. She is pulled between love of Joe and a search for the truth about her father and Joe’s role in his imprisonment.

Dimitri Armatas plays the emotional George Deever, Ann’s brother who appears later in the play and whose revelations have a dramatic effect on the turn of events.

The rest of the cast are all strong in their roles and add colour and background to the story. Steve Row plays Jim Bayliss a doctor and Tracey Okeby Lucan plays his wife Sue who throws in some dark comments. Daniel Boole plays Frank Lubey, a great believer in astrology and Tess Needham is his wife, Lydia. Jayden Bishop plays Bert a kid in the neighbourhood.

The set, designed by Maureen Cartledge, depicts the Keller’s family home and is cleverly designed so we can view certain actions inside.  Sound design by Bernard Teuben and lighting by Sean Churchward add atmosphere and tension.

ALL MY SONS is a play depicting the evils committed by ordinary men, the destruction that results and the suffering of those who refuse to acknowledge it. It plays the Pavilion Theatre in Castle Hill Showground till 20 August. Recommended.