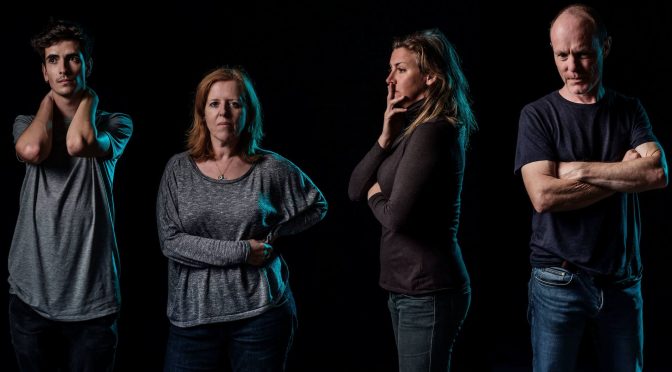 ALL MY SLEEP AND WAKING is playwright Mary Rachel Brown’s deeply moving look at the knot of family. A story of how the ties that bind us can just as easily undo us. Unspoken rules and rusted on habits undergo a tectonic shift, as a family attempt to understand the truth of who they are to each other.

Brown has revisited and rewritten the play.   We had a chance to speak with her before Apocalypse Theatre Company opens the newly reworked  play at the end of November.

SAG:         I love speaking to playwrights, it’s just amazing how you do what you do.
MARY:      Well, I have to say the process isn’t so amazing. I think I’m a lot slower than a lot of writers but we all get there in our own way.

SAG:            That’s true, so why go back and revisit a work? Why choose this play to rewrite?
MARY:        When I first worked with Dino (Dino Dimitriadis), we were dramaturg on the same project , he asked to read all my work. So I sent it to him and he was the one who said I’d like I put that play on.

It’s over 20 years since I wrote it and there were things I was happy with. The kernel and the characters all worked but there’s certain things I have learned in 20 years of writing plays that I wanted to give to the project before it went on. So it was kind of a meeting, a really great producer and director wanting to do it.

Also having the opportunity to… there’s something when you are a young writer that you can’t necessarily capture as an older writer . When you are young you don’t know the rules and you’re a little bit … fearless. And so there’s something in the writing that I really enjoyed revisiting.

It’s the best of both worlds . There’s a craft and a skill that you generate as an older writer that advances your work but there’s something about the fire in the engine of just writing fearlessly when you are young. So it was sort of about applying craft but it is still me in my early 30s.

SAG:        That’s a fascinating concept really . I’ve read in interviews you have said you have a kind of love hate relationship with your characters.
MARY:      I think a bit of distance meant I could have a bit more love and affection for these characters than I normally do. Because the big wrestle with them had happened over 20 years ago when I birthed them.

SAG:          Did the original writing come out of a caring experience because the play is about carers isn’t it ?
MARY:       Yeah well it’s about family and how caring is distributed among family members and that comes with all sorts of complexity. I think there’s an expectation, with family, that everything is even and fair. And that’s not necessarily the way things work. I think there’s also an expectation that a father or mother is the same father and mother to everybody but often people have vastly different experiences and often contradictory experiences.

Things can reach a tipping point once a caring situation arrives because all those things surface again. About how you were brought up and who your parents are to you and the differentiation amongst siblings about their experience of their parents. I think all those things become strangely very raw and immediate again.

SAG:       When we spoke last time you said that you were hardwired for comedy but it doesn’t sound like this play lends itself that way.
MARY:      I think there is a bit of comedy when, you know, you are standing outside and something strange happens and you go what’s all that about. So there’s that for the audience in being able to watch a family’s rusted on habits and rules and the peculiarities of that. And that thing that goes on in families that everyone has a version of the truth, specific to their experience . And habits and rules are not allowed to be broken until a high pressure situation, like an impending death of a family member, forces those to a breaking point. The break is often bittersweet and a bit funny .

There’s something about the profundity of an impending death … it’s not sustainable!

You can’t always be in the centre of the profoundness of the situation . The dishes still need to be done and people’s flaws are more evident beside they are tired and they are under pressure . Ideally I think we think we would all become saints in those situations but that’s not sustainable either.  The people who try to end up busting and breaking the worst .

SAG:         Does the fact that you are also an actor and director have an effect on the ‘words’?  Apart from the plotting and story.
MARY:      Ah.  You know you need less words.  You know you can do with less words because of what actors can do with the words.  Sometimes young writers, or even myself if I am having a bad day, can write three lines when an actor only needs one of them to get the message across in the line.  So I think being an actor, you understand the economy of dialogue and how it can be just as effective done economically.  And I also think you understand that often really good lines, that are beautiful birds and have great  literary quality, don’t necessarily work as dialogue.

It’s always my job to go through and say to myself, it’s a beautiful line, it sounds gorgeous… in a novel or an essay.   But it’s not what would come out of someone’s mouth in conversation.  I always put integrity before beautiful phraseology.

SAG:        It must hurt though.
MARY:       (Laughs) It does hurt but the rewards outway it.  Sometimes when you see a line really cut through and you know it wouldn’t have had that impact if it had all that fat around it.  It hurts least when you are on the fly in a room with actors, it hurts a bit when you are on your own!  A small part of you goes, am I making a mistake here.

SAG:        As always such a pleasure to speak with you and for these insights into the writing process.  I am very much looking forward to seeing the show, especially in the intimacy of Old 505.
MARY:     As most of my plays are, this is a relationship piece and it’s a pressure cooker that’s only got two environments in it, predominately set in one room.  So its a great space for that.

ALL MY SLEEP AND WAKING by Mary Rachel Brown from Apocalypse Theatre Company [Facebook] plays at Old 505 Theatre.