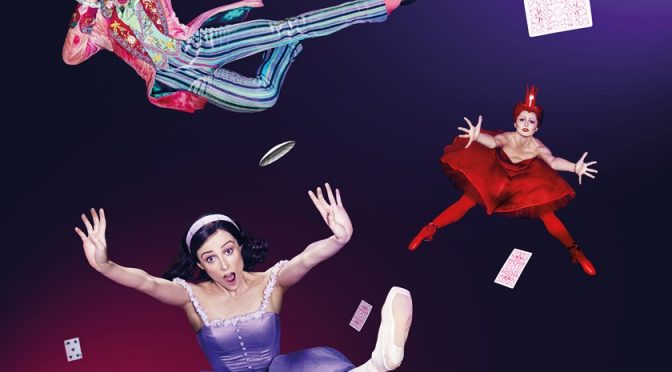 Brilliant family friendly ballet entertainment, has been adapted from Lewis Carroll’s childrens’ book. Christopher Wheeldon‘s always inventive and breathtaking choreography created for each famous character, is meticulously and gracefully combined with colour co-ordinated eclectic costumes by Bob Crowley, together with captivating colourful set designs also by Bob Crowley, all are a standout, and the famous plot has been blended with a memorable and thought provoking music score by Joby Talbot that contributes resonant depth to each well-remembered character. Banks of moving spots are used to create everything from black/white checker board flooring through to swimming in an ocean of tears.

Fully animated 4K high definition, bright video projection delivered the immediate ability to suspend disbelief, as Alice is seen to tumble and to fall down the rabbit hole, and provides the “drink me” Alice shrinking experience and then the “eat me” Alice expanding sequence, complete with the changing sizes of the wall of doors of the room that she tries to escape from. Gigantic Alice trapped in an ultra-tiny room, is a magnifient magicial delight, with its delicious false perspective.

The Red Queen of Hearts is extremely tall, and later becomes extremely tall and wider, soon heralding the sudden and unexpected appearance of the Red King of Hearts. The Red Queen soon delivered howls of laughter from the children in the first night audience, so many wonderful things happen, and always suitable for all ages.

The captivating performance delivered by the tap-dancing Mad Hatter, drew applause from the well entertained audience. The full sized Cheshire Cat easily generated oohhs and aahhs from all, as did the brilliant full sized Caterpillar.

This Australian Ballet production, again and again, has absolutely perfect mises-en-scène optimally visualised for each and every complex scene, where the combination of choosing the perfect cast for each role, and every element of the set design and costumes and music soundtrack, have joined together to create a unique and very original ballet experience. Highly recommended.

ALICE’S ADVENTURES IN WONDERLAND is playing 5-22 December 2017 at The Capitol Theatre, Haymarket, Sydney.

Photography by Johan Persson. All images depict the Artists of The Royal Ballet in Christopher Wheeldon’s Alice’s Adventures in Wonderland©. © ROH, 2013.