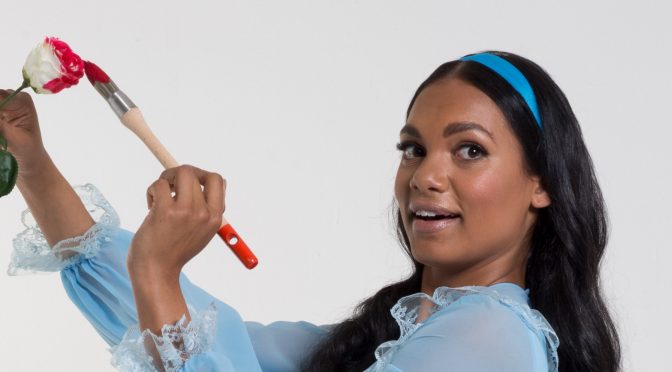 ALICE IN WONDERLAND is intergenerational theatre crafted with care and performed with joy.   It is an offering received with the love of immersion and the thrill of total involvement in a world of imagination.   And wonderfullest of all, it’s home-grown.

As crows and cicadas vie for time on the audio track preshow, we know we are somewhere Australian.  There’s a playground before us with climbing apparatus, a bendy slide and bright coloured boxes.  And a mysteriously tossed aside toy bunny lying sadly on the stage floor.  Alice doesn’t see him when she enters.  With a long, annoying hair ribbon rather than an Alice Band, she is busy being irritated, confined and restricted by her blue suit.  She can’t even raise her arms properly.

A girl who just wants to play AFL needs to be able to rise up to take a mark.  Poor Alice.

That’s when that toy white rabbit comes to life in a marvellously emotive and beautiful way.   He will steal her ribbon and lead her off into an exuberantly magical world of constant change and delightful interpretation. It’s a 150-year-old classic after all.  This production is beautifully scripted by Mary Anne Butler.  It is respectful of the original text yet modern in its creation.  It uses context to explain big words like DNA and existential crisis and never, never, never talks down to its little audience.  Plus, there is an hilarious metaphorical and literal wryness for the grownups.  Look out for the duck!!!

Despite the preshow audio, it only gently references Australia… too much would be slithy and frumious! leaving it all still there for the Alice lovers!  She shrinks and grows, meets a grin before a cat, and interacts with all sort of animals and people.  Each well-loved Carroll creation makes an appearance, interpreted through some stellar puppetry and engaging characterisation. The script, and Christabel Sved’s direction, showcases the multifaceted talents of this ensemble cast.

Dubs Yunupingu has instant rapport … and not just with the children.  She will speak directly to the audience “Have you ever been scared?” and will look to us for support during her adventures.  With some lovely expressions to share Alice’s bewilderment, Yunupingu has complete command of the challenging physicality.  She presents us with a character who travels from a prim and prissy ‘girl’ to a wise and confident person, blissfully no longer neat and pretty.  The little ones of the audience get that she is changing and they are not above giving advice either, which Yunupingu takes with a stunning smile and an enveloping warmth.

The cast have such a lovely way of working together and Alex Packard, Ebony Vagulans and Drew Wilson who play every other role are all scene-stealers in turn.  Packard sure can Blackbottom and his dancing White Rabbit is simply a delight.  Wilson’s Queen of Hearts is as funny as it is subversive and his little Dormouse is such a sweet creation. Vagulans’ Caterpillar is a crowd favourite and the kids all invest in the wisdom of the wormy creature.  ALICE IN WONDERLAND is a show played at a pretty frenetic pace, even in slo mo, and the cast’s ability to drop out of one character straight into another while world building with a complicated costume, set and props plot is mesmerising for young and old.

It’s a flip and spin set with secrets, puppets that are more toys come to life than big or story-distracting, a great many highly detailed props and costumes that give variety and key-ins for the audience.  (Production Design: Melanie Liertz).  Steve Toulmin’s music score makes use of magical elements like chimes and bells and there is no shortage of whoosh and plonk but we are not cheated of the kind of full orchestra swell that kids love.  The lighting (Matt Cox) keeps out of the way by making pretty then giving static states for the cast to perform in.  There is enough colour and an occasional change without being showy or detracting from the crazy adventure.

And what an adventure!

ALICE IN WONDERLAND is wonderful. Are you able to believe up six impossible things before breakfast?  Well … take the family or borrow a family or pretend you have a family because, like Alice, you will be a different person than yesterday.  Alice, you definitely are awesome!

ALICE IN WONDERLAND is playing at Riverside Theatres as part of the Sydney Festival until 27th January.  For more information visit: https://www.sydneyfestival.org.au/2018/alice-in-wonderland