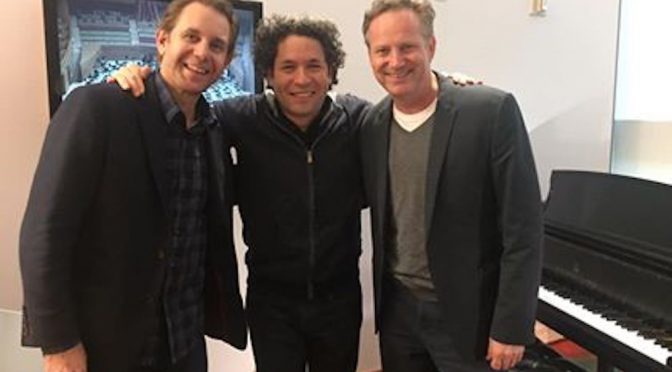 I managed to contact Alexander Briger the day before he flies to Melbourne for the final preparations with the Australian World Orchestra and their concerts in Melbourne, Canberra and Sydney.

Australian World Orchestra you may ask?  It’s not a new idea, admits Briger, there are other orchestras based on a similar format.  There’s Claudio Abbado’s Lucerne Festival Orchestra, which Briger much admires and there’s Ivan Fischer’s Budapest Festival Orchestra.  But unlike the Australian version they’re made up of leading European players who do not have a country as a common denominator. The difference with The Australian World Orchestra is that 50% of the players are ex-pat Australians in top orchestral positions abroad and the rest command leading positions in Australian orchestras.

The germ of the idea came to Briger in 2006 while conducting the AWO’s Japanese equivalent in Tokyo; they comprised only Japanese players based in Japan.  Briger’s brainchild was more ambitious. But how to do it? He contacted uncle (the late) Charles Mackerras who liked the idea and suggested they perform Beethoven’s 9th in their opening concert.  First player to be sounded out was Nick Deutsch, oboe-player extraordinaire for the Leipzig Gewandhaus and other famous orchestras. He bubbled with enthusiasm; other ex-pats were approached and they all wanted to be part of it.

At the first rehearsal, it was obvious the orchestra was something special.  “Everyone was looking at each other, at their peers. We started off with the Tchaikovsky on purpose because the double-basses (the best players from Berlin, New York, Vienna and Sydney) start it off and then it filters through to the others.”  Simone Young who conducted the first set of concerts in 2011 noticed the tension in the room and during a break said they looked “like the Australian Youth Orchestra with wrinkles” And then it was like watching a musical windscreen wiper! They all started swaying to the rhythm; bows flying everywhere.  It was immediate. The sound was European and rich. The strings were full. Simone summed it all up when she proclaimed: “I think we have an orchestra.”

“On the opening night,” recalls Briger, “when the orchestra walked on stage they received a 3 minute ovation.  Nick Deutsch was so nervous he had tears streaming down his face and couldn’t even blow the A to tune the orchestra with.  Simone walked in to applause the like I’ve never heard before.” Later, in the middle of Tchaikovsky’s first movement and during a slight break in the music someone in the audience, caught in the excitement of the night, shouted “Bravo!”  The clamour for tickets was so great after the first night, people had to be turned away for the second concert.

Since then concerts have been performed to great acclaim with conductors Zubin Mehta and Sir Simon Rattle.  “One of the great orchestras of the world,” Sir Simon was heard to say.

This year Alexander is at the helm with concerts in Melbourne, Canberra and Sydney.  The dates are Friday July 26 at the Hamer Hall in Melbourne, Llewellyn Hall in Canberra the next day, Saturday July 27th.  The programme for both concerts consists of Nigel Westlake’s Flying Dream, Janacek’s Taras Bulba and ending with Sibelius’ 2nd Symphony.  What a sensational programme!  On Tuesday 30th July the AWO performs a chamber music concert at the Sydney Recital Hall – Mendelssohn’s String Quintet followed by the Brahms’ E Major Sextet.

I recall the concert in 2013 at the Opera House Concert hall with Zubin Mehta conducting Mahler’s First Symphony and Stravinsky’s Rite of Spring.  It was an electrifying night for music lovers attended by the likes of the late Ritchie Benaud, Ian Chappell and the then Federal Attorney General George Brandis.

I don’t think I have ever witnessed a more enthusiastic and appreciative audience than the one that packed the Concert Hall that night.  I would urge all music lovers to attend these concerts and listen to these magical Australian musos!