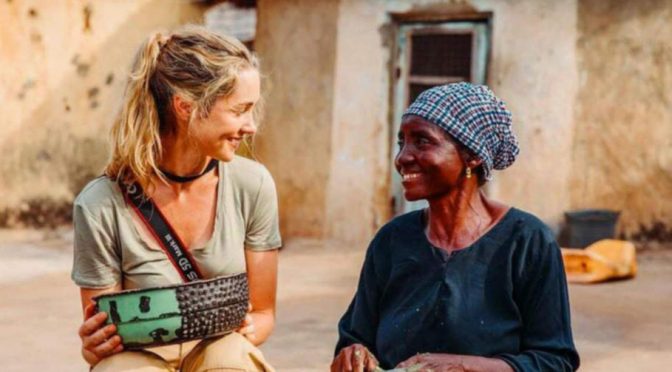 Akoni is an aspiring astronomer studying in in his homeland, Nigeria. A newspaper headline informing 86 female students had been abducted in a village prompts him to visit his own village to see that his mother and sister are safe. It’s a joyous and loving reunion that soon turns to carnage as his family is slaughtered and Akoni becomes another one in the millions of displaced persons around the globe.

Two years later finds him washed up on the shores of Bondi beach, homeless, depressed, displaced in body and soul.

In the same city, a miserable bride is made up, wedding dressed and photographed. Her name is Violet. She is a model and it’s a photo shoot, but the gig has a sad poignancy as she has been recently “widowed”, her photographer partner killed covering the conflict in the Sudan.

This despairing, despondent pair collide and connect in the impressive independent film, AKONI.

Written, produced, and directed by Genna Chantelle Hayes who also plays the part of Violet, AKONI is an assured and accomplished feature film poignantly humanising the plight of displaced people, whether they be foreign refugees or Indigenous Australians, the “discarded” as one character puts it.

Without shying away from the negative truths of Australian society, AKONI aims to pursue the positives, with violence and provocation, although pivotal plot points, overshadowed by benevolence and healing. Hayes’ writing is spare, her sense of mise en scene a strong suit in let the picture tell the story.

Kit Esuruoso’s portrayal of Akoni has a heartbreaking despair allayed by a palpable dignity. It embodies one of the film’s refrains, “It doesn’t matter where I am, it’s what I am.”

AKONI Premiere Gala for World Refugee Day, Monday June 20 will be hosted by author, motivational speaker and former refugee Aminata Conteh-Biger and features a post-film Q&A with writer, director, producer and star Genna Chanelle Hayes, star Kit Esuruoso and renowned human rights lawyer and Australian hero, Alison Battisson. This event will also act as a fundraiser for Human Rights For All. Arrivals from 6pm for a 6.30pm start at the Ritz Randwick.

Featured image : Gemma Chanelle Hayes with cast on the set of Akoni.