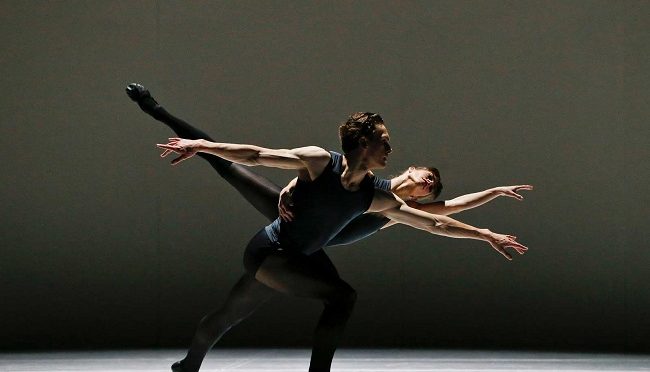 A superb triple bill , first performed in Melbourne last year , that showcases the Australian Ballet at its best . The company’s three resident choreographers each present a striking work. All three have been or still are dancers with the company .

First we saw Stephen Bayne’s CONSTANT VARIANTS (2007) using Tchaikovsky’s Variations on a Rococo Theme. The polished, transparent score is integral to the work and features a ravishing cello solo by Caleb Wong .

Four couples are paired on stage before splitting and reforming in various combinations. All wear dark high cut leotards , the men in sheer dark tops the women in velvety burgundy bodices. Michael Pearce’s set design features oversized segments of picture frames as if at an art gallery, above a rather shadowy lit stage with lighting as devised by Jon Buswell.

Bayne’s choreography is very demanding and features some almost impossible lifts and partnering. The stillness of frozen posed tableaux is used most thoughtfully. There is steely yet delicate pointe work included and Bayne’s style ( perhaps reminiscent in this work of Balanchine and Macmillan) featured pure clean lines of movement.

The musicality of the score and dancing blended at times as if the Orchestra (under the excellent baton of Simon Thew) and dancers were pulsating and breathing together, each complementing the other.

Next came the wonderful AURUM by Alice Topp , based on the Japanese art of kintsugi, where broken ceramics are repaired and made complete again using gold lacquer. The gold honours the value of the original piece and simultaneously highlights the damage that occurred. The still retained cracks become part of the piece’s history. Topp in her work explores an analogy with human relationships : There are breakages and scars; and while restoration is possible, nothing will be exactly the same . ( AURUM is the Latin word for gold. )

AURUM features six couples, the men topless in white leggings the ladies in kind of Grecian shifts. Topp’s powerful ,hypnotic choreography features dizzying spins and unusual lifts and partnering . It demands a very flexible back and includes runs and tension, fall and release .The ‘line’ of the rippling , pulsating choreography is long and stretched.

Towards the end the set moves and there is cloth with projections of pottery and the cracks and the gold use to repair it and a reflective gold floor. It is as if the dancers are exploring space and searching for the light. The relentless, pounding rhythms of music by  Ludovico Einaudi accentuate the blocks of movement in the thrilling finale for the whole cast .

First seen in 20:21, (2015) Tim Harbour’s rather cold , bleak but superbly danced with feverish, angry intensity FILGREE AND SHADOW has been revived . It is abstract – although based on the concept of birds that, instead of fleeing a hurricane, fly directly into it in pursuit of the calmer air that will carry them to safety above- and uses the recorded musical multi textured soundscape by 48nord (Ulrich Müller and Siegfried Rössert) which includes snippets of recordings from trains, birds and tightening ropes as well as rumbling piano and crackling distortion in a whirl of relentless energy.

Kelvin Ho devised looming white curved walls and a cylinder which, combined with Benjamin Cisterne’s snappy lighting, work to great effect. The dancers wear unisex semi transparent black or gun metal grey coloured costumes. Harbour’s intense , demanding choreography is perhaps reminiscent of Forsythe’s and includes arms open in fifth position , fast slithery floorwork that sees the cast spring off the floor almost as soon as they fall, deep lunges and high leg extensions in opposition to the torso, angular arms and spiky fingers. There are some extremely difficult lifts and partnering and many spectacular leaps. As well there are slips and slides and a great sense of pulling up and verticality. Towards the end the dancers are almost like flying sculptures. It is essentially an ensemble piece for the twelve dancers but there is also an extended pas de trois that is a highlight .

Another example of incredible athleticism and superb dancing .
A very wonderful triple bill that is a magnificent showcase for the terrific Australian Ballet dancers.

The Australian Ballet is presenting VERVE at the Joan Sutherland auditorium at the Sydney Opera House 5-25 April 2019.

CAST FOR THE PERFORMANCE I SAW
Conductor : Simon Thew