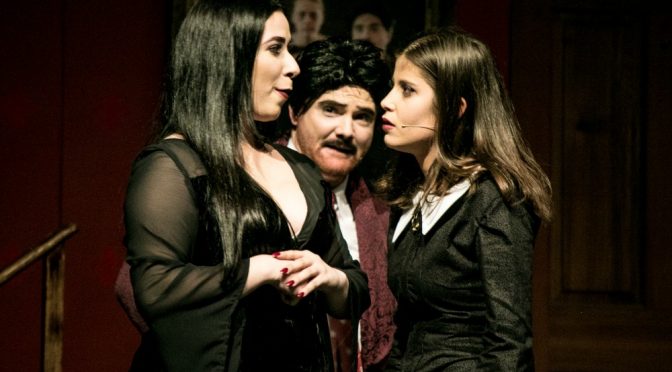 Prepare to snap your fingers to the 2017 main production for New South Wales Theatrical Society (NUTS), as they present THE ADDAMS FAMILY THE MUSICAL, an adaptation of the cult television show originally inspired by the cartoon series by Charles Samuel Addams.

Under the direction of Carly Fisher, musical direction by Hamish Stening, and the choreography by Chanel Cheung, the show comes to life (or death) with the vibrant (or dark) cast of characters. Wednesday announces her love for a sweet boy from Ohio called Lucas, bringing the families of both together but how will everyone cope? What secrets will be revealed with full disclosure? And will love prevail for all?

Gomez, performed by Aidan Kane has a devilish charm and compliments Lisa Gluckman’s sultry Morticia. The pair establish themselves as equal heads of the house, doting after children Wednesday played by Lali Gill, and the mischievous Pugsley by Sasha Cole. Comedic timing by cheeky Grandma Chiara Middleton and towering Lurch Jasper Bruce round out the family and add warmth to scenes. The delightfully playful Uncle Fester is performed by Dave Collins, always ready to make the audience laugh and cheer at any moment (particularly with his timely comment regarding marriage equality in 2017).

The Beineke family is a stark contrast to the brazen Addams. Lucas, performed by Nyasha ‘Nash’ Nyakuengama radiates warmth, complimenting Wednesday’s dark mood. Sinead Cristaudo as Alice Beinke transforms from the meek mannered to the wild via the song ‘Waiting.’ Ryan Fogwell as Mal Beinke is the stiff husband and father who hasn’t had a spring in his step for years… until now!

The Addams Ancestors wonderfully integrate into the songs and story, helping the characters to solve problems along the way via dance numbers. As each is dressed from a different era, the ancestors reveal the Addams extensive and rich past.

The music and lyrics by Andrew Lippa, are catchy and fun, brought to life by the 12 piece orchestra under Stening’s direction. ‘When You’re an Addams’, ‘One Normal Night’, and ‘Tango de Amor’ are standouts.

Collin’s punchy rendition of ‘The Moon and Me’ is sweetly staged, surrounded by glowing stars and a large white beach-ball moon on a stick. Similarly, Gluckman’s ‘Just Around the Corner’ is charismatic and funny, including a dance with the grim reaper. Gill’s ‘Pulled’ is powerful and wonderfully sets the tone of the evening with the families. Kane hits all the right notes during the show but stands out in ‘Happy/Sad’ where we see a softer side of Gomez with Wednesday. Perhaps the most surprising singing cameo comes from Bruce’s Lurch in ‘Move Towards the Darkness,’ delighting the audience with his rich voice.

Performed on campus in the Science Building, the foyer is decorated in Addams Family style, with cobwebs and headstones – perfect for setting the mood.

THE ADDAMS FAMILY THE MUSICAL is a fun night out, sure to make you laugh, cheer, dance, and click your fingers in your seat.

The running time is 2 hrs and 30 mins including one interval.