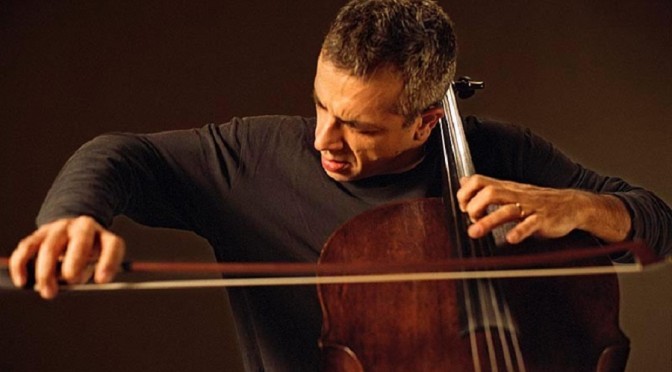 This was a glorious concert with some extraordinary, ravishing, intimate and exciting playing by special guest artist/composer Giovanni Sollima on cello.

An internationally recognised musician from Palermo, Italy ,Sollima has composed for diverse artists including legendary cellist Yo-Yo Ma and 70s punk icon Patti Smith .The ACO themselves, led by Tognetti,  were in fine, athletic form .

First up was the Respighi ‘Ancient Airs and Dances ‘ Suite No3 , which , in the first movement , was wistful and delicate with subtle use of understated pizzicato when required. The second movement had a soulful violin solo .The third movement was a little less melancholy and was a dialogue between the two halves of the Orchestra. Some of it was intense and spiky, which was contrasted with the almost circular wheeling dance like themes of the cello and violin , all of which tumbled towards a brisk , excited conclusion .

Then came the Boccherini Cello Concerto No.3 in G major G480 featuring Sollima on cello . It has a languid opening and Sollima’s vibrant ,glorious playing is amazing. He is passionate and intense and plays the cello protectively and intimately like a lover .The cello responds and produces the soaring , fragile delicate music that transports us. The second movement is brighter, starting off vivaciously and is luscious , powerful and passionate,

The third work , Sollima’s own ‘ L.B. Files’, is stunning with a very contemporary , spiky sound .It is a four-part micro-dramatisation on the life of Luigi Boccherini and also includes recorded voiceover . It has a stormy opening and Sollima picks up the cello and walks around the stage .There is fast , furious bowing and the music almost feels dangerous .The second , angelic section however is slower and more hypnotic. One thinks of ’ the music of the spheres ‘. A blistering performance that had the audience in ecstasy.

After interval came a fresh, energetic rendition of Haydn’s Cello Concerto No.1. in C Major ,Hob .VIIb/1. Originally written for celloist Joseph Weigl and regarded by some as one of the greatest cello pieces ever written , it was believed lost , until it was rediscovered in 1961 and has since become a staple of the cello concert repertoire. The concerto reflects the ritornello form of the Baroque concerto as well as the emerging structure of the sonata-allegro form, with all three movements written in the sonata form.

Sollima used his cello to produce a mellow tone, with passionate, lyrical playing .A lot of the piece was a dialogue between the soloist and orchestra .The second movement was exquisitely played, at times  with a light and feathery touch. The third movement in contrast was more joyous , flute like at times, and the frenzied fingers flew.

This was followed by the final dramatic piece , Verdi’s String Quartet in E Minor arranged for string orchestra ( yes one of the rare non opera works Verdi wrote. Written in the spring of 1873 during a production of ‘Aida ‘ in Naples, it’s the only surviving chamber music work by Verdi that we have . It is typical Verdi Grand Opera with soft lyrical interludes, soaring melodies, triumphant climaxes and rigorously precise contrapuntal writing.

It had strong, darkly passionate playing and was full of ominous rumbles and scurries, flurries and whirls. It was multi layered with great tonal range and the second movement had a stormy dialogue between the two halves of the orchestra. In the third movement there was an emphasis on pizzicato and the sound at times was percussive .

The Haydn & Italian Cello concert played at the Opera House 13 April then is also at the City Recital Hall and tours nationally .