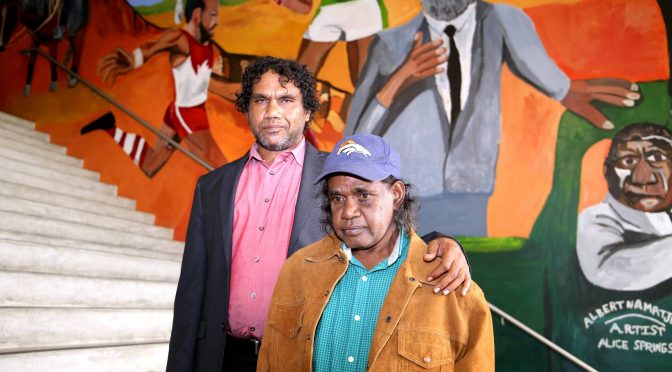 In its thirty year history the Museum Of Contemporary Art (MCA) has only had seven murals on the fifteen metre wall alongside the steps which lead from Circular Quay to the Museum’s first floor.

The  MCA commissioned Archibald Prize winner and Western Arrente painter Vincent Namatjira to ‘decorate’ the foyer wall. Using a medieval technique called pouting to enlarge his vision from his initial  sketches, Namatjira hand painted onto the foyer wall over a two week period, creating the artist’s largest work to date.

The work entitled P.P.F (Past-Present-Future) depicts an array of seven indigenous male figures, including a self portrait, painted on the desert landscape of the artist’s community of Indulkana in the Arangu Pitjantjatjara Yankunytjatjara region in South Australia.

In an interview with MCA’s Aboriginal and Torres Strait Islander Collections and Exhibitions curator Clothilde Bullen, Namatjira said, “I am trying to bring my neck of the woods to the big smoke for everyone to see”.

Like a signature mark of the work of film director Aldred Hitchcock, Namatjira includes himself, standing on the roof of his great grandfather’s ute, holding an aboriginal flag, pointing towards Sydney Cove. Namatjira indicated, in his quietly spoken manner, that he was pointing towards a Sydney Cove filled in with shrubs, grass and trees with aboriginal people collecting bush tucker.

Joining him at the opening was his close friend and fellow artist Eric Barney.

Accompanying the Foyer Wall mural is an audio guide where Namatjira discusses the seven figures and their significance in his life. It is available via the news MCA app, simply titled mca.art, which can be downloaded for free free from the app store.