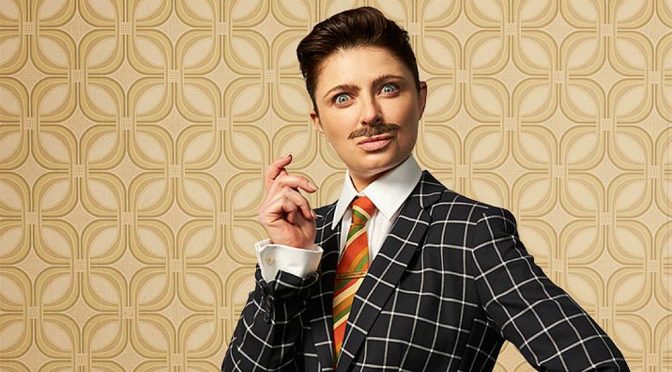 This is the classic Dario Fo play in a fresh adaptation by Francis Greenslade and Sarah Giles. The main thing about this adaptation is that a gender swap goes on and all the male roles are played by females. The aim of this is to satirise the males in the play and to poke fun at their foibles and alpha male traits.

Fo’s story revolves around a man simply known as the Maniac, well known to police as a mischief maker has been arrested and is being interviewed at a police station in Milan. It is the same police station where recently an anarchist fell to his death under suspicious circumstances. Circumstances see the Maniac alone in the room after the two police officers have gone to a meeting. Having no fear he answers the police phone when it rings and finds out that a Judge is coming to the station to investigate the death of the anarchist. Curious to find out more about the case he decides, (he is a great impersonator),to take on the role of the Judge and manages to convince everyone around him of his new identity.

As he starts asking questions about the case the police dig more and more holes for themselves. The icing on the case is when a well known journalist Maria Feletti comes to the station and after her investigations the police have nowhere to hide.

Fo used as his ‘source’ material/inspiration for the play a  real life incident which took place in Milan were an anarchist Giuseppe Pinelli was charged with the bombing of a bank in which fatalities occurred. The police interrogated Pinelli for 72 hours at a police station after which he fell or was pushed from the police station’s 4th level window.

The play, whilst comical and farcical in nature, was deeply political at the time it was written (1970). Fo and his wife were left wing Marxists and enraged by the conservative, right wing elements dominating the  Italian political climate. The play’s central theme and plot device is the pursuit of truth, what really did happen to the anarchist. This theme feels very relevant now in this post truth climate/world in which we live.

To give you a good description of the style of this play this may help. Fo was awarded the Noble Prize for Literature in 1997 with the Swedish Royal Academy stating ‘Fo emulated the jesters of the Middle Ages in scourging authority and upholding the dignity of the downtrodden’.

Another good description comes from designer Jonathon Oxlade – ‘The play is essentially about a madman, or rather a perceived madman (there is method in his madness) entrapping crooked cops into revealing themselves and sending them mad in the process.’

The cast play in  Oxlade’s set of a late 1960’s very cluttered police station. Interesting things of  note were the playboy pics on the wall, a dartboard used during the play and a pic of the great Sophie Loren.

A main feature of the set was the back wall featured a panoramic window depicting the cityscape of Milan. The window of-course has due significance.

Oxlade’s costume design was also of the period featuring some very wide pant-legs and flares.

Make-up design was a  viral part of the show with so many wigs and other accoutrements used to great effect in helping define character.

The performances by the cast are excellent. Amber McMahon shows great comic flair as the Maniac who dons various guises. Nothing quite prepares one for when, at one time, she comes out of the filing cabinet and then appears in another guise with a ‘wooden’ leg, a black eye patch and an extendable hand, claw like, adding to the play’s madcap nature.

Julie Forsyth is great as the freaky  looking Inspector Bertozzo who originally interviews the Maniac. There is a lot of physical comedy in her performance as the agitated, impatient, highly strung Inspector.

Caroline Brazier gives a very polished performance as the Superintendent and of all the characters she is the most convincing actress playing a male role.

Annie Maynard impressed as the hard working, focused journalist Marie Feletti as well as one of two Constables.

Susie Youseff drew a lot of laughs as second Constable with a fake beard, wandering eyes  and an inability to even get a simple coffee order right.

This was a great night at the theatre, fast paced, well performed, plenty of hijinks and slapstick, but with one always aware of the biting satire that the laughs are delivered with. Fo was well aware that sometimes the best way to get a message across is to deliver it in a comic way.

Highly recommended, THE ACCIDENTAL DEATH OF AN ANARCHIST is playing the Drama Theatre, Sydney Opera House until 27th October.