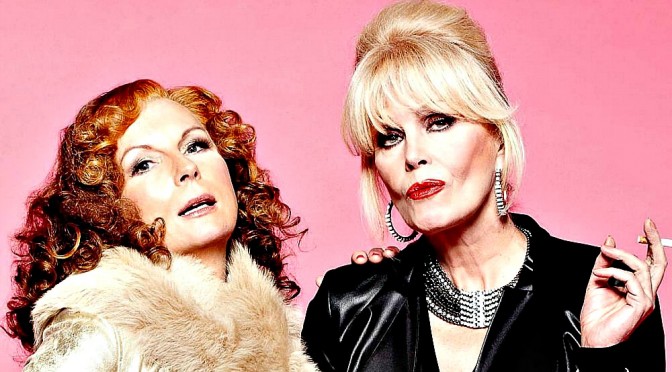 Absolutely fatuous, ABSOLUTELY FABULOUS: THE MOVIE comes with the usual flab and padding that goes with lifting a thirty minute television show and puffing it out into a ninety minute feature film.

Kath and Kim almost got away with it, and it is only the muscle memory of a quarter of a century of Eddy and Patsy endearment engendered by Jennifer Saunders’ and Joanna Lumley’s characterisations that makes this intermittently funny foray into film palatable.Plus the absolutely fabulous Julia Sawalha as the long suffering Saffy, who has a heartbreaking scene-stealer with her rendition of the Janis Ian song, At Seventeen.

Not to mention Kathy Burke as Magda, the Godzilla-ess of event management, together with a couple of cameos from Barry Humphries and Rebel Wilson (who just about hijacks the movie in her role as an airline stewardess).

The cinematic equivalent of reading a glossy gossip magazine, ABSOLUTELY FABULOUS: THE MOVIE sees Eddy and make a Brexit with her Botox buddy, Patsy, taking flight to the South of France, fugitives for allegedly pushing Kate Moss into the Thames.

Location, location, location takes over the annoying matter of a narrative, with cinematographer Chris Goodger just pointing his camera at the splendor of the Cote D’Azur.

Indeed, ABSOLUTELY FABULOUS: THE MOVIE can be seen as a ninety minute course of cameo therapy, with the fab abs sculptured by belly laughs now turned to ab flabs. Absolutely frivolous.