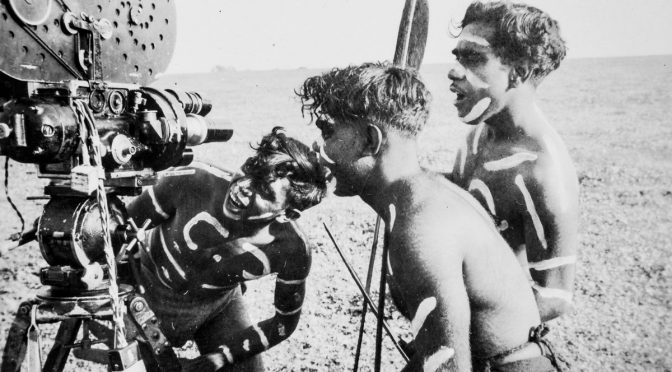 Family is gravity. And core to Tiriki Onus’ family is his grandfather, Bill Onus, a proud, articulate Yorta Yorta and Wiradjuri man from Victoria, a truly heroic cultural and political figure who revived his people’s culture in the 1940s and ignited a civil rights movement that would, against enormous odds, change the course of history.

Tiriki wrote and acted in the critically acclaimed musical drama, William and Mary, about the love affair between his grandparents, William and Mary Onus.
For Deborah Cheetham’s Indigenous opera, Pecan Summer, he created the character of ‘Uncle Bill’ based on his grandfather and played that role.

Now, together with veteran film maker, Alec Morgan, he has made the extraordinary documentary, ABLAZE to further propagate the cultural importance of Bill Onus and the gravity of his actions and convictions.

The archival footage is pretty much proof that Bill was the first indigenous film maker in Australia, remnants of a picture thought lost, perished in flames shortly before its release after it had drawn the attention of Australian security services. The images it depicted are damning and run contrary to the prescribed history of Australia at the time, one that stubbornly persists in some quarters today and has impeded true reconciliation in this country.

It is asserted that Walt Disney invited Bill to America but that Australian government coverts conspired to prevent him from leaving Australia. Seems they ordained Bill was too dangerous to be let loose on the world stage.

A depiction of righteous resilience and resistance against the bastardry of racial prejudice and paranoia, ABLAZE is a tale of intrigue, subterfuge, sabotage and inspiration.