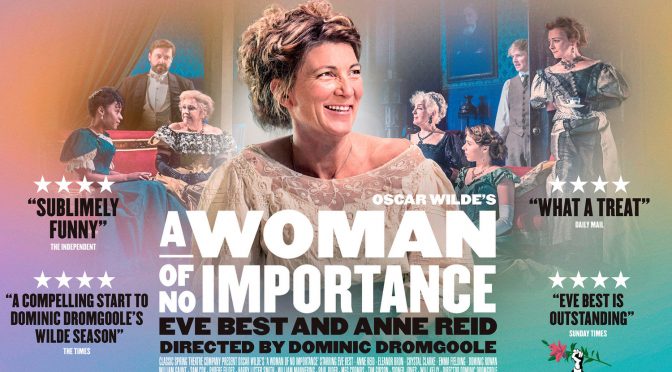 First performed in 1893 Wilde’s play requires a large cast of sixteen and Dromgoole has a splendid ensemble as led by Eve Best as Mrs Arbuthnot.

Best , stunning in a Beardsley like gown of black velvet , is superbly moving as Mrs Arbuthnot, the “Woman” of the title who attempts to prevent her beloved son Gerald taking up a diplomatic career with Lord Illingworth who, 20 years back, fathered and abandoned him. She is cruelly trapped. Should she reveal to Gerald the truth and risk being judged? Or should she stay silent?

She can either let Gerald depart , in all innocence, with Lord Illingworth and hopefully have a fabulous career, or she can destroy his prospects by revealing their hidden secret . Best is compelling and gives a magnificent, heartfelt performance, finely nuanced and revealing Mrs Arbuthnot’s continued brave resolution and integrity.

Dominic Rowan as Lord Illingworth is charismatic, suave and debonair – at least on the surface – but over the course of the play we see how he is really a complete cad and rotter.  Harry Lister Smith as Gerald , overly moralizing and perhaps a little young for his age , is all blue eyed blonde tousled hair boyish eagerness to start his career .

Hester Worsley , a young rather prim Puritan American heiress, is played by Crystal Clarke as passionate about freedom and changing society and is courted by Gerald .  Eleanor Bron is annoyingly bossy and perhaps funny as luxuriously voiced domineering Lady Caroline Pontefract,who treats her husband John as a henpecked servant or lost parcel.

Jonathan Fensom’s set designs are detailed and elegant , capturing the era in which the play was set – but they demand a few minutes’ scene-changing each time , which is covered by front-curtain entr’actes in which Anne Reid (Lady Hunstanton) and some of the supporting cast deliver penetratingly ironic yet seemingly sentimental music-hall numbers.

A WOMAN OF NO IMPORTANCE screens at selected cinemas from 10 March 2018.  You can follow the Oscar Wilde Season at their website, where you can also see trailers and search for cinema times near you.