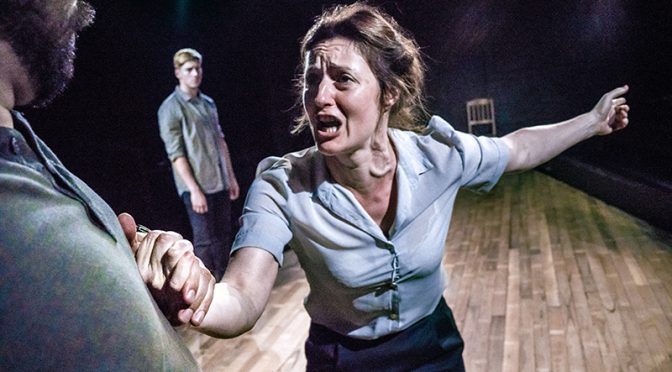 The experience of Arthur Miller’s A VIEW FROM THE BRIDGE (1955). How best to describe it?! It’s like…

It’s like a scene from a classic old action movie. The camera is panning from a long way away as two cars are being driven at incredibly high speed in opposite directions on a mountain. They are swerving all across the road. They come closer and closer to each other. You know its going to happen. They crash and both cars and the drivers inside are incinerated, the remains scattered along the road. Inevitable..Shocking..

Miller sets his play up so things can happen no other way. How does he do it?! This is my take on it. You can take it or leave it.

It’s about a deeply flawed, volatile main character who finds himself placed in a hugely difficult situation that you know is just going to get the better of him, defeat him. He doesn’t have the ghost of a chance.

Now, here’s the situation that is always going to have gotten  the better of Eddie. Eddie and his wife bring in illegally from Italy two immigrant brothers, relatives of Beatrice, Marco (David Soncin) and Rodolpho (Lincoln Younes). They house them and find work for them.  Rodolpho is an  attractive vital young man, a singer, full of life, exuberant. For Eddie, the unthinkable happens. His darling, his Catherine, falls in love with him, an unstoppable way.

They are very happy together. However Eddie has this thing in his head, and it won’t go away, but just  grows bigger and larger. Rodolpho just wants to marry Catherine so that he can get American  citizenship and once he is a new American he will dump her and leave  her, just leave her on the side of the road. And Eddie just won’t cop that and he fights it like hell to the inevitable, bloody end.

Miller writes the play like a modern version of a Greek tragedy. David Lynch is excellent and has just the right sombre tone as world weary lawyer, Alfieri, who plays the Greek chorus, predicting an overseeing Eddie’s tragic demise.

Sinclair’s production is excellent all round. All the performances are strong and well sculpted.

Sinclair performs the play in the round. I believe this is a for the Old Fitz and it works  well. Lends the play even more sharpness, distinctiveness, intimacy.

Go see! A VIEW FROM THE BRIDGE is on view at the Old Fitz until 25th November.