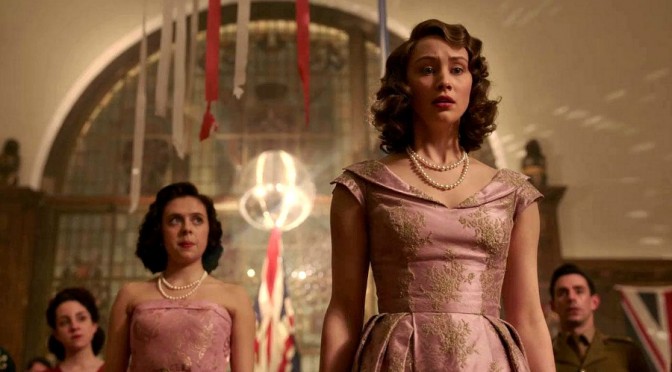 Now that we are awash with the placenta of publicity for the latest royal birth, let’s flash backward to the past, VE day 1945 with two young princesses Elizabeth and Margaret, achingly desperate to get out among the people to celebrate the end of WWII.

A ROYAL NIGHT OUT is one of those flimsy whimsy affairs that resemble a cross between a gossip glossy and a refined BBC historical costume drama.

It’s all jolly hockey stick hilarity and faux fairy-tale frippery as the level headed once and future queen of England, Princess Elizabeth and her wayward sibling Margaret, hit London town and party with hoi polloi.

Soon separated from their security detail, the siblings are subsequently separated from each other, prompting a close encounter for Elizabeth with a young soldier seemingly at odds with authority.

Although he resembles a pumpkin he becomes an unwitting Prince Charming aiding Elizabeth to track down her scamp sibling and continue to embark on a riotous night to remember, which Buckingham Palace would probably care to forget.

A piccolo accompaniment to the more robust bookends of The King’ Speech and The Queen, A ROYAL NIGHT OUT seems rather a piece you’d have a royal night in with.

Trevor De Silva and Kevin Hood’s screenplay is serviceable, predictable and pedestrian as is Julian Jarrold’s direction, and the whole tawdry affair seems better suited to the box than the big screen.

David Cronenberg darling Sarah Gadon ( Good God, a dame from the dominions!) plays the prim and proper Elizabeth with a charming grace that befits our reigning monarch, while Bel Powley does the less dignified Margaret, a wide eyed wild child let loose in the wide world and determined to party like it’s 1945.

The jewels in the acting crown however, are Rupert Everett as King George and Emily Watson as the Queen mother. Both bring a distinguished gravitas that in lesser hands would fade into the regency wallpaper.

The morsels of morality and scraps of snobbery inherent in this film would make Republicans of most of us where the Monarchists among us will lie back and think of England, as it once was.