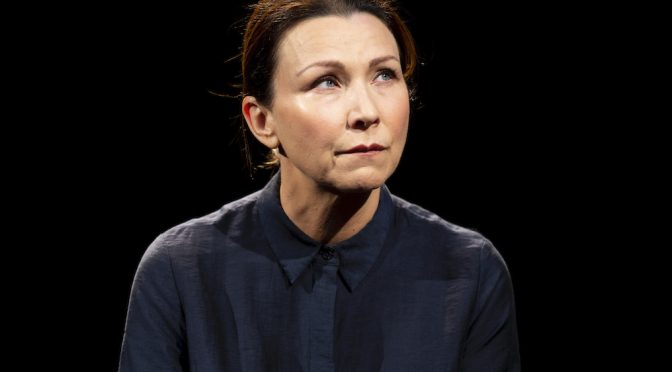 As the show started I noticed my friend lean forward in her seat and set her gaze firmly on Anita Hegh sitting in a chair near the front of the stage as she started reading from a black book, Virginia Woolf’s essay ‘A Room Of Her Own’.

Throughout the performance, with Hegh often getting up and sweeping across the stage, and another actress playing mini scenes in a glass booth behind her, my friend barely moved. She was transfixed.

It was that kind of a show.

Virginia Woolf’s essay is perhaps best known for the quote, ‘A woman must have money and a room of her own if she is to write fiction’. She packs a lot into her essay. Things like – How men have dominated the conversation too long, that’s the way they have wanted it to be, and that women have to step up. That the world needs new women writers. That women should no longer tolerate discrimination. (This was the early 1920’s, women were not even allowed into University libraries). That women need to become independent of their male partners.

Furthermore, that it was ok for women to be attracted to other women. “Then may I tell you that the very next words I read were these -’Chloe liked Olivia…’ Do not start. Do not blush. Let us admit in the privacy of our own society that these things sometimes happen. Sometimes women do like women.” At the time, Virginia Woolf was having an affair with another writer, Vita Sackville-West.

Woolf’s essay was considered very provocative for its time. Carissa Licciardello’s imaginative debut production, from a stage adaptation by herself and veteran thespian Tom Wright, brings it vividly to life.

David Fleischer’s set featured a large glass booth. Was this the  symbolic room of one’s own?!

Compelling theatre,  A ROOM OF ONE’S OWN is playing the upstairs theatre at Belvoir Street Theatre, 25 Belvoir Street, Surry Hills until Sunday 23rd May, 2021.