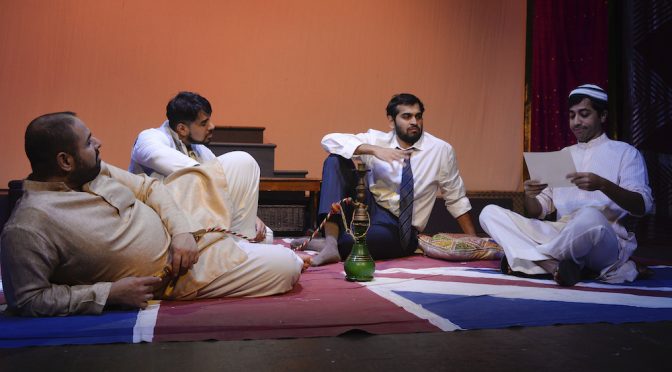 The great British writer E.M.Forster’s 1924 novel A PASSAGE TO INDIA is regarded as his most acclaimed work.

The novel is set in India in the 1920’s with the British raj  still ruling over the Indian subcontinent. It had been the case since 1858. There was, however, a burgeoning movement in  India, especially amongst young people, to break away from British rule and to become an independent country.

Forster’s novel is such a grand novel that it was always going to be a big compromise to adapt it for the theatre.

The feature/highlight of Mark G Nagle’s production is its striving to encapsulate the feel, the atmosphere,  the spirituality, the gregariousness of India and its people to the audience.

Nagle’s staging was clever with the scene changes and shifts in settings managed well. The scene where the cast created an elephant on stage was just lovely.

The British, in the main, were portrayed as arrogant and disrespectful to the locals, or natives as they derogatively liked to call them. All the more reason why the independence movement became stronger and unstoppable.

Atharv Kolhatkar gave a sensitive, touching portrayal in the lead as Dr Aziz.

Miles Boland gave a sympathetic performance as Cyril Fielding, the English principal of the government school near Chandrapole.

The scenes between Dr Aziz and Cyril Fielding that took place in Dr Aziz’s prison cell were touchingly played.

Christiane New, a Newtown High School Of The Performing Arts graduate, gave a good performance as the conflicted Adela Quested who finally has a  conscience.

Susan Jordon  gave a convincing performance as the  frail, elderly Englishwoman Mrs Moore who travels to India with Adele in the hope that she will marry her son, Ronny. She is the type of woman who can’t handle much drama.

Simon Lee gave a good performance as Mrs Moore’s son, Ronny, the town’s Magistrate, who is supposed to be accepting of the locals but his attitude says otherwise.

Other performers were performed adequately rounding out what was a large cast.

Great Britain finally let go of its reign of India and Pakistan without any of the shocking consequences for democracy that took place when it let go recently of Hong Kong.

A PASSAGE TO INDIA is making its way through the Genesian Theatre until Saturday 19th June, 2021.