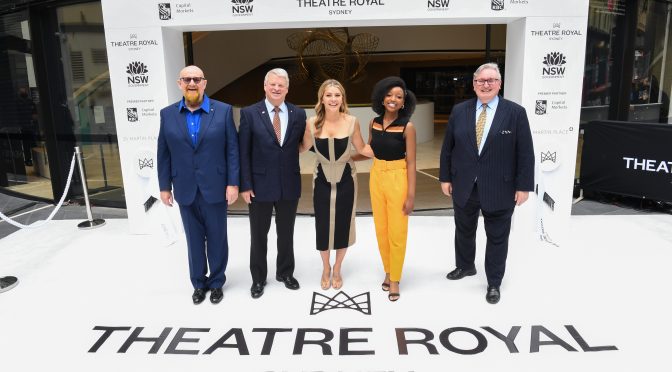 There has been some form of the Theatre Royal on or near its current site since 1833. There have been four iterations of the Theatre Royal including the rebuilding from a fire and the current theatre which rose from the ashes of a demolition in 1971 to make way for the MLC centre.  In fact from the original plan the MLC had no provision for a replacement theatre. However, union and public agitation caused Lend Lease, the developer of the MLC Tower, to reverse its decision such that it requested the architect of the Tower to incorporate a theatre near its base which Mr Seidler was very happy to do.

Over the years the purity of his design was compromised and the fourth iteration lasted from 1976 to 2016. As a result it lay dark for five years. During this time period the New South Wales Government decided to recreate the tower base including the Theatre Royal to conform more strictly to Harry Seidler’s original design. Unfortunately Harry Seidler did not live to see this as he died in 2006.

The New South Wales Government obtained a long term lease and undertook a worldwide search  to find a production company which would provide a continuous stream of commercially viable shows. They settled on the Trafalgar Group of Companies headed by Sir Howard Panter and his wife Lady Dorothy Squire. On the 29th November, 2021 Sir Howard Panter together with Don Harwin, the NSW Minister of the Arts, Tim McFarlane, CEO of Trafalgar Entertainment Asia Pacific, together with cast members of Jagged Little Pill, Natalie Bassingthwaighte and Emily Nkomo were the designated ribbon cutters to open the newly refurbished theatre. Uncle Allen Madden, Gadigal Elder gave the Welcome To Country.

At the opening ceremony Sir Howard indicated his disappointment at the dearth of theatre seats in a city the size of Sydney. Minister Don Harwin indicated that the Government was in the process of formulating a strategy to provide more theatre seats.

Trafalgar Entertainment has made good on its promise to keep providing the theatre with commercially appealing productions with a trio of shows commencing with Jagged Little Pill followed by Girl From The North Country and An American In Paris, all current Broadway musicals. Sir Howard Panter also promised that after he produced a successful West End production Sydney would be the first city outside of the UK to obtain that production.

The theatre has retained its predominantly red and gold colour scheme and the auditorium has gained a hundred more seats bringing its capacity to 1200 seats.

Also restored is a superb hanging sculpture, the Mercator, commissioned by Harry Seidler from his friend Charles Perry.

On hand, and giving her stamp  of approval, to the refurbishment was Harry Seidler’s widow, Lady Penelope Seidler.