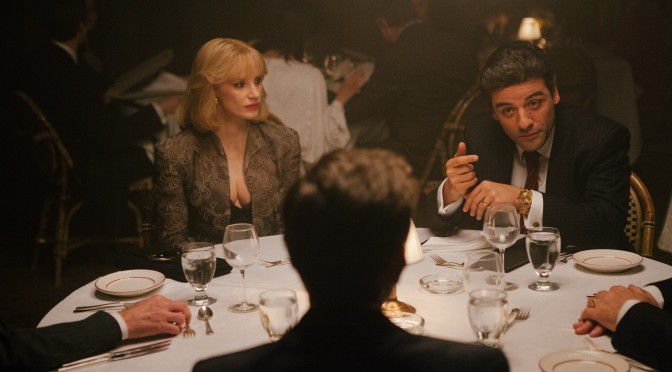 Instant classic, A MOST VIOLENT YEAR is a clever subversion of the Godfather style crime dramas.

“Just when I thought I was out, they pull me back in.” says a frustrated Michael Corleone in The Godfather Part III.

It’s a sentiment shared by Abel Morales in J C Chandor’s marvellous, A MOST VIOLENT YEAR.

The film follows thirty-three days in the life of Abel Morales, brilliantly played by Oscar Isaac, a Latin American immigrant who, together with his Brooklyn-bred wife Anna, portrayed by the stunning Jessica Chastain, is building a small heating-oil enterprise purchased from Anna’s gangster father. Vowing to run the business legitimately, he discovers that the ladder to success is a crooked one, where simmering rivalries and unprovoked attacks threaten his business, family, and––above all––his own unwavering belief in the righteousness of his path.

A MOST VIOLENT YEAR is set in New York City during the winter of 1981, statistically the most dangerous year in the city’s history and plays out within a maze of rampant political and industry corruption. In those days, climatologists were predicting a New Ice Age, the United States had come through an oil crisis, and the idea of heating oil being a road to riches was a legitimate speculation for a young entrepreneur.

J.C. Chandor’s third feature, after the sensational Margin Call and fascinating All is Lost, examines one immigrant’s determined climb up a morally crooked ladder, where one misstep could have you fall into a moral morass, toward the place where best intentions yield to raw instinct, and where the most upstanding and principled are most vulnerable to compromise.

To add to the Godfather series allusion, Isaac looks like a young Pacino with a performance to reiterate the redolence. Isaac’s Abel is a cool, calm, charming, well-mannered and measured strategist.

Chastain is steely, confident, a cool blonde, a formidable femme fatale and ferocious lioness to her pride.

As their lawyer, Albert Brooks is an inscrutable counsel for hire, astute with the statutes, hunts with the hounds and runs with the foxes.

David Oyelowo gives gravitas as the assistant district attorney who is investigating the industry and Morales individual business affairs.

Allessandro Nivola plays a suitably slick competitor and Peter Gerety couldn’t get any more blue collar as a Teamster who calls a shovel a shovel and a spade a spade.

The score by Alex Ebert is evocative and the Original Song America for Me should have been an Oscar contender.

A MOST VIOLENT YEAR is a masterful, mature thriller, where ideals and pragmatism collide, crash and combust into a totally satisfying drama.