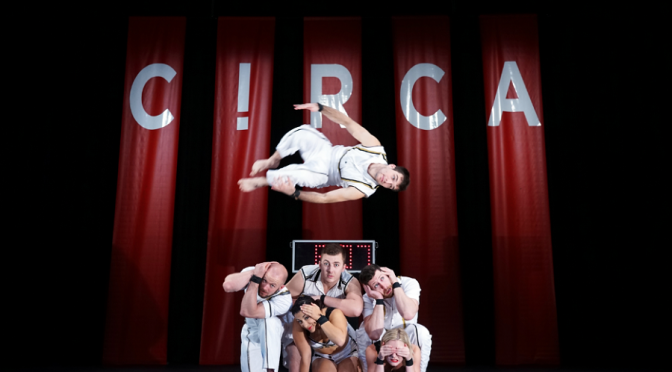 Performing all week without break, seven incredible acrobats from one of Australia’s most acclaimed circus companies are showcasing their talent in A Mini Festival of Circa, hosted by the Merrigong Theatre Company. The performances are an eclectic mix of circus styles that cater for every demographic. 61 Circus Acts in 60 Minutes is a fast-paced, boisterous concoction of acts that makes for a thrilling family show. In Wunderkammer, the performers get a little racyin a hilarious and sexy cabaret-style piece.Then there is S- the feature show.

S is a stunning ensemble piece laced with high-level acrobatics that was inspired predominantly by the letter’s shape, grammatical function and sound. This theme is evident throughout, as bodies ebb and flow together blurring the lines between where one flawlessly sculpted physique begins and another ends.

“We were also heavily inspired by group acts, as this is what we found audiences best responded to in other shows,” explains Ben Knapton, Assistant Director of Circa Contemporary Circus. “We were interested in pushing the acrobatics in a ensemble way, having the acts link into one another while keeping all performers on stage throughout.”

In a combination of sinuous movement and sophisticated acrobatics, each scene morphs seamlessly into the next fuelled by a dramatic and poignant body of music by the Kronos Quartet. The show is exhausting and the audience is given no time to rest, which is seriously saying something about the cardio vascular endurance of these athletes.

Above all, S allows the audience to witness the sheer talent of the performers’ raw, fluid movements with stage design, costuming and apparatuses that uphold the show’s minimalist production. Clad in simple black pants and elegant mesh leotards against the backdrop of a plain white square, the performers’ every move and mistake is exposed and unable to be hidden behind the flamboyance of traditional circus production. This stripped-back contemporary performance will abolish any preconceptions you have about the limits of human strength and flexibility.

Hosted by The Merrigong Theatre Company, A Mini Festival of Circa will continue until the 3rd of August with S concluding the weeklong stint of breathtaking shows. Tickets are modestly priced with the Merrigong Theatre offering generously discounted tickets for seniors, children and ‘under 30s’ for all of their upcoming shows. Circa’s S continues to manoeuver its way around Australia, with Canberra up next, and tour dates can be found at: http://circa.org.au/shows/tour-dates/