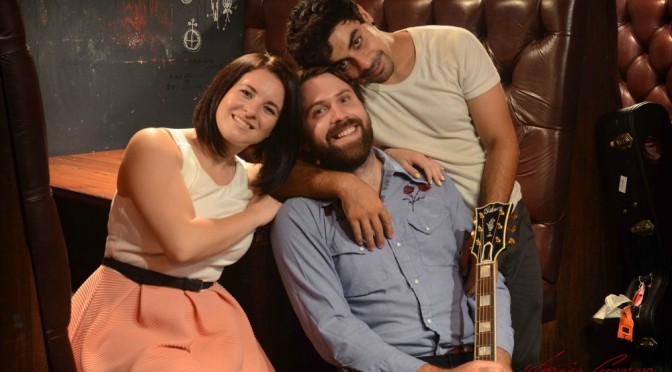 Everyone loves a good title.  A MAN WALKED INTO A BAR has been comedy gold for generations and in Off the Avenue’s production of the same name, it’s truth in advertising.  The show is at Blood Moon Theatre at the World Bar and a man walks in.  A woman walks in.  A folk singer walks in.  A reviewer walks in. The audience walks in and there we all are in a bar.

This is  absurdist comedy with a weaving, convoluted series of male/female in-a-bar behaviours.  It’s an entertaining evening of non sequiturs, lots of character changes and some sweet little songs to top it off.

The script by New Zealander David Geary is a great fun in places and the stream of consciousness, word play and Monty Python-esque word association is a part of the charm of the production.  There were a few opening night nerves but it’s no mean feat to learn a text like this and the professionalism and the rehearsal that has gone into to the work is evident.

As ‘The Man’, Chris Yaacoubian, handles the character changes and hoary old jokes very well, interpreting both the serious and the comic sections with skill.  He shares a charming rapport with ‘The Woman’.  Nina Marsh plays The Woman and is amusing and thoughtful by turns and gives all her characters interesting and believable lives.  In addition, she has a particularly nice singing voice.

The direction by Andrew Beban however, does have some off-putting aspects.  A jarringly loud drum and cymbal not the least of them.  Putting Marsh on the floor for two of her lovely songs does not work in an intimate venue like this either.  Marsh could carry it off as a woman alone in the spotlight.  The characters are alone in the spotlight on occasion, and there is definitely something AA going on.  Here, Beban has effectively chosen to give those sidebars an uneasy feeling that we are eavesdropping .

Singer songwriter Sam Newton is there on stage too and he does a 30 minute set before the production which is very enjoyable.  His presence is partly practical; he provides the music which supports the more emotional content, and partly theatrical.  He seems to be having a thoroughly good time which is also a clever  way of involving the audience and giving us the subtle response cues which are required for such a fast paced offering.