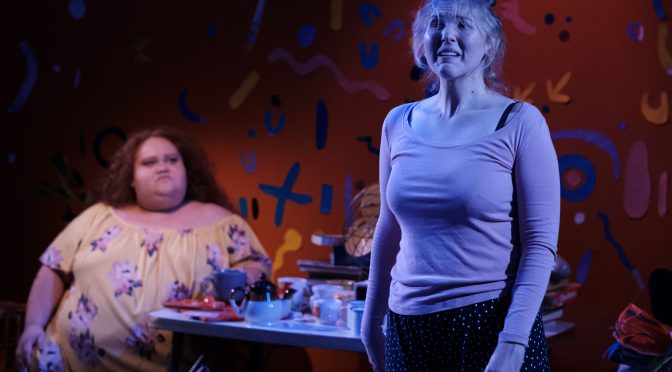 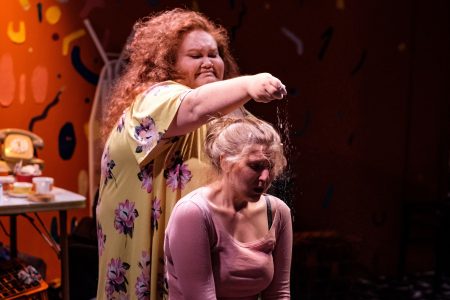 Cutting through the clumsiness of condolences and the crippling guilt that courses through grieving, A LITTLE PIECE OF ASH is a little piece of theatre with a big heart and a whole heap of soul.

Chain smoking Jedda finds it hard to cope with the sudden and untimely death of her mother, Lily. She feels guilt that she was in attendance as she took her last breath, a distress that sends her on a destructive bent of booze, sex and ciggies.

An assortment of friends offer cold comfort consolation, showing their ineptitude at grieving as well, tenterhooks on eggshells, foot in mouths, platitudes and cliches, well meaning as a casserole but a dish of bitter herb for the distraught bereaved.

The action of the play takes place in Lily’s living room, and aptly, Lily still “lives” here, sitting in the corner, a chorus of one commenting on the actions of her daughter.

Stephanie Somerville is intarissable as Jedda, both physically and in her emotional range of rage, a largesse of the various stages of grieving.

Moreblessing Maturure is sparkling as the first friend trying to navigate the awkward stream of sincere condolence, her gentle approach in direct contrast to Luke Fewster’s Chuck, with his “shit happens” so let’s get “shit faced” on cheap wine approach.

Alex Malone invests a spikiness to Ned, an estranged pal of Jedda who considered Lily as a second mom and wants to push and explore the spiritual with her old mate.

Toby Blome puts in a scene stealing show stopper as Eddie, a would be comfort fuck, whose truth and dare, show and tell shtick is schmick and utterly hilarious.

A little piece of The Dreaming, A LITTLE PIECE OF ASH stirs the embers of remembrance, joyous and sorrowful, and there’s a lot to sift through.

A Little Piece of Ash was shortlisted for the 2017 Patrick White Playwrights’ Award and presented at the Yellamundie National First Peoples Playwriting Festival. It plays at Kings Cross Theatre till April 27.