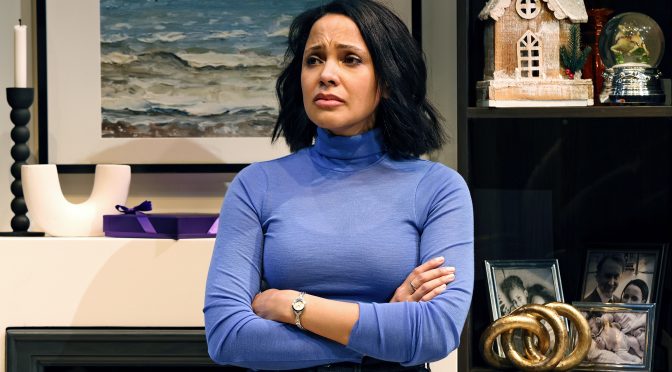 Henrik Ibsen’s A Doll’s House was first performed in Copenhagen, Denmark on December 21, 1879.  It created a storm. It represented the radical start of a new kind of theatre, a theatre  that addressed relevant  social issues, instead of presenting theatre as entertainment and escapism. One reviewer wrote at the time, “When Nora slammed the door shut on her marriage, walls shook in a thousand homes.”

In 2022 Ibsen’s play doesn’t have this kind of elemental, raw power. It, however, remains a classic and is in good hands with Mark Kilmurry’s well crafted production and Joanna Murray-Smith’s prescient, contemporary adaptation.

James Lugton is well cast as Torvald, the archly conservative head of the Helmer household. He has only recently recovered from a nervous breakdown and has now received the good news that he has been promoted to bank manager.

Chantelle Jamieson gives a fine performance as his high spirited wife Nora who is delighted with the news and is in a celebratory mood as it is Christmas time. The play starts with her setting up a Christmas tree which has only just been delivered.

Torvald’s good news has spread around the local community. Kristina, well played by Lizzie Schebesta, is an old friend of  Nora’s who arrives at the Helmers. She is struggling financially and asks Nora if she can ask her husband if he can find a job in the bank for her. Nora says that she will try.

In confidence Nora reveals to Kristina that she borrowed a lot of money from a shady local lender to pay for the family, she, her husband and their three kids, to go on a long holiday to help Torvald recover from his breakdown. She had lied to Torvald and  told him that the money had come from her father’s inheritance when he passed away. Nora tells Kristina  that if Torvald finds this out he will never forgive her and that their marriage will be ruined.

Shortly after David Soncin as Krogstad comes to visit the household. Krogstad is the shady lender who lent the money to Nora. Krogstad has a meeting with Torvald also in search of a job at the bank. Nora panics inside, what if  is he is going to create problems for her. He is too close for comfort. Soncin gives a fine performance as the weasley, insipid Krogstad.

The only other visitor on Christmas Eve is old family friend, the charming Dr George, well played by Tim Walter, who has long had a crush on Nora.

Joanna Murray-Smith’s adaptation contemporises the play well, getting the feel right, and there are plenty of modern references. The was just one quibble. During the play Torvald affectionally calls Nora his little sparrow. I can’t see anyone calling their partner little sparrow these days. A more modern affectionate would have suited better.

Veronique Benett’s set and costume design suited the play well. I particularly enjoyed the way that Torvald’s office opened up towards the play’s end, revealing another ‘layer’ to the set, his pristine office.

Verity Hampson’s lighting design was of her usual high standard and had some lovely touches.

A DOLL’S HOUSE is playing the Ensemble Theatre, 78 McDougall Street, Kirribilli until 16 July 2022.