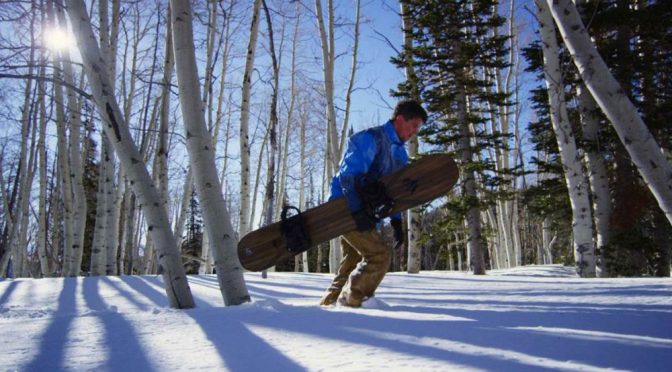 Cinema of survival gets another instalment in 6 BELOW: MIRACLE ON THE MOUNTAIN.

Based on Eric LeMarque’s remarkable book, it tells his own story of survival, both physical and psychological, when he became lost on a snowbound mountain for eight days in February 2004.

A former ice hockey champion and keen snowboarder, Eric was on a downhill run of drug addiction and despair, alienated from his father, estranged from his mother, and facing court on a moving violation charge when he ventured out for a bit of snowboarding, February 6, 2004.

Recklessly, he takes a route uncharted, called UNSANCTIONED, and as fate would have it, the weather takes an uncharted turn for the worse. A clear day, where you could see forever, suddenly turns into darkness barely visible, impairing vision, disorienting direction, and Eric finds himself lost. Snow white becomes grey ghost and Eric’s demons come out to play. Looking at the end of life, his past life flashes before him, the domineering dad, the domestic unrest, his failure to perform as a team player, his slide into drug abuse.

6 BELOW: MIRACLE ON THE MOUNTAIN plays to the usual tropes of lost on the slopes – frustration in the frost unable to make a fire, raging thirst with frozen water all around but unable to access immediately for fear of hypothermia, encounter with predatory wildlife – in this instance a wolf – the passing of an unheeding helicopter overhead, and the recording of a final farewell in the face of inevitable death.

Madison Turner’s script is golden in its silence, the man alone against the elements. When it requires dialogue, it is drab and clichéd. The flashback sequences are only a little better than government anti domestic violence commercials with the same degree of shrill and shriek.

Josh Hartnett is very good in the lead role, a slalom performance charging through an obstacle course of rage, despair, delight and resolve. Mira Sorvino is convincing and committed enough to span the chasm of believability as his mother, just as determined in her hope for survival as he is.

Stuntman turned director, Scott Waugh, plays his ace card with cinematographer, Michael Svitak, in capturing the awesome beauty, the majestic vista of the snow scape of the Utah mountains. The terrain is stunning and both the terrestrial and the aerial photography is breathtaking.

Shades of 127 HOURS but with frostbite and scenery to die for, 6 BELOW: MIRACLE ON THE MOUNTAIN is a memorable hope springs eternal  tale.

6 BELOW : MIRACLE ON THE MOUNTAIN is now available  on Blu-ray, DVD & Digital through Defiant Screen Entertainment