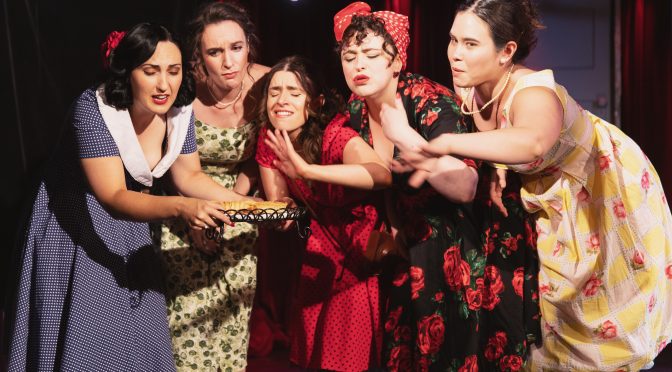 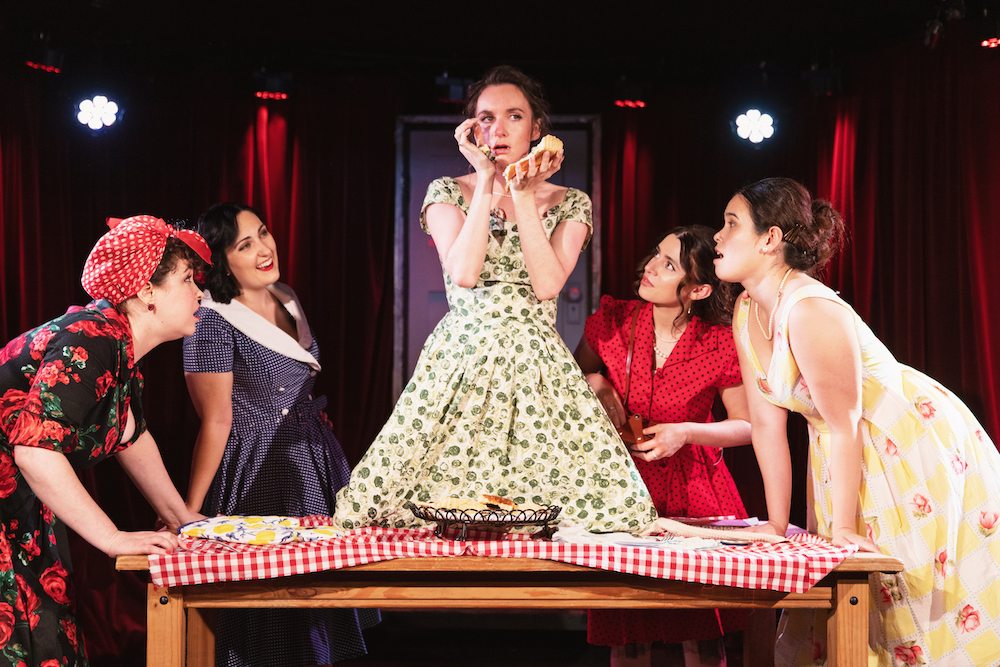 A joyous coming out romp, 5 LESBIANS EATING QUICHE, is currently on show at the Giant Dwarf. Director Rosie Niven says it provides a space in which “women can be unapologetically silly, funny, and proud”. This show does that but it is not all just hilarity. There is bitchiness and political back-stabbing against larger issues of war and destruction outside permeating the 1956 world of the Sisters of Gertrude Stein.

The audience is welcomed by banners alongside their seating indicating this venue is the Annual Quiche Breakfast hall and by the various Sisters who chat to them as the cast enters. The essential ingredient of a quiche is the ‘egg’, which becomes a revered symbol throughout. Also revered is their innovative now deceased female founder who brought together chickens and their eggs which has led to this annual event. Their motto “no men, no meat, all manners” underlies the rules and conventions of the society. Codes about dress and hair are evident. Their wardrobe selection from Julia Pennisi’s “extensive 1950’s wardrobe” is superb, allowing the characters to be even more vibrant. Using Buddy Holly and other music from the period adds to the charm.

These are a strong capable quintet of women whose vulnerabilities and past traumas are partly revealed during their period of lockdown enforced by external threat. As layers are peeled back, strictures come under strain until certain things can no longer remain hidden. The audience of ‘widows’ is regularly invited to join with applause and support – though it seems most audiences don’t need to be invited as we accept being part of the breakfast gathering. The publicity promised “a tasty recipe of hysterical laughs, sexual innuendos, unsuccessful repressions, and delicious discoveries” and that is what we received.

All five performers gave strong performances with good comic timing. They balanced the tension between farce and underlying serious notes. Nyssa Hamilton as Lulie epitomized the loud bouncy leader.  Olivia Mortimer-Eade is well-cast in her role as Ginny, the English outsider who wants to ‘write her own words / minutes’ and break out to retrieve her cat. Julia Pennisi as Vern does well in her role as initial stabiliser providing a more conscientious perspective in the group. Dominique Purdue appeared to relish every moment of being Wren. Demitra Sealy provided the darkest aspect in the play, taking the audience and cast a long way from hilarity.

Thanks to Maddie Hodges as stage manager for providing the welcoming ‘hall for the annual breakfast’, Nicole Lepusic, technical director, Rosie Niven for directing and Carly Fisher for producing and bringing us this funny, delicious outing.

The play, written by Andrew Hobgood and Evan Linder, is well-timed for Mardi Gras and reflects a period when the characters faced their own ‘lockdown’. A winner in the 2012 NYC International Fringe Festival, it remains a winner for audiences in Sydney.