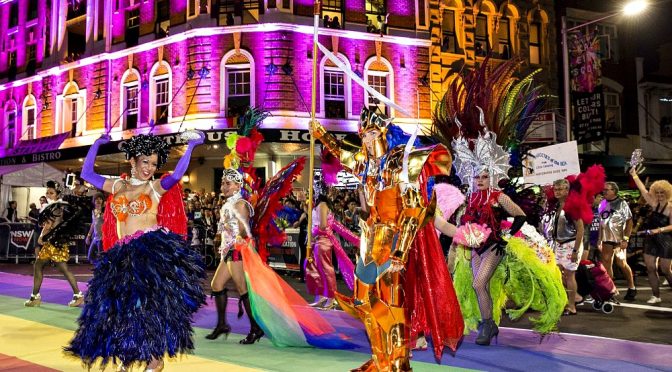 Writing as much as I do , I am sometimes confused about superlatives .  Too much? Too little to make the point? Too literary ?  So with a little tear in my eye , I leaned over to the nice young man sitting next to me and asked what he was thinking.  What the hell was I thinking?  Anyone  who was there was , of course , fabulous . ( I include myself!) but I hit the height of fabulousness with my innocent enquiry.

We were at the Sydney Gay and Lesbian Workshop Party to launch the program for 2017.

The Sisters of Perpetual Indulgence ( the second oldest in a world wide network of the charity organisation ) had done a blessing which showed a surprising intimacy with the float making process.   ” May  the venue be filled with bitching in an artistic fashion and the noise of action.” They blessed the volunteers , the building, even the tools.  ” May your glue guns never run dry and may glitter never clog your screws.”  Ha!!!

Roll the sizzle reel of a film Mardi Gras is hoping to develop for 2017 including the Honorable Michael Kirby reaching out with equality, respect of human dignity and acceptance and the “quilt around us … to those who have no voice. ” Auntie Donna Ingram’s Welcome to Country. Some good natured ribbing from Terese Casu (CEO) of Greg Clarke ( Creative Director) about the melon tones of his suit to match the tangerine of next year’s theme.

CREATING EQUALITY in 2 metre high individual letters around the venue.  Each with one of the 16 images which shine a spotlight on the diversity of LGBTQI  people.  My People / My Tribe #barenakedtruth

Mardi Gras is not just a parade … or a party . It is a huge cultural festival with events running continuously from the Rainbow Flag Raising on the 17 th of Feb and the unofficial opening of the season at Mardi Gras Fair Day on the next Sunday until the spectacular event up Oxford Street  and the Laneway Party on the day after, 5th March.  There are performances, visual arts, film and design, comedy festival  and so many fun, thought provoking, discussion creating community events .  My fave is  ‘The Little Black Dress Run’.

The program is too vast to go through but these are some of the events that piqued my interest from the launch.

KOORI GRAS @ 107 Projects where indigenous community members can explore the First People’s contribution to the struggle for LGBTQI people’s rights.

ADMAN: WARHOL BEFORE POP.  At the Art Gallery of NSW this is the most comprehensive exhibition dedicated to Warhol’s early career in 25 years.

Such a feast , but my first ticket buy is CABARET THE MUSICAL with Paul Capsis, Chelsea Gibb, Marcus Graham and  so exciting …. the much loved, much missed and absolutely thrilling Kate Fitzpatrick!

But back to my search for appropriate superlatives and my new best friend . The Sydney Gay and Lesbian  Choir had just given us Phillip Phillips’  HOME.  “Hold on to me as we go” when I leaned over to ask for adjectives.  Inspirational; mood enhancing ; uplifting; straight to the heart; passionate; thrilling.   I had happened upon Craig Craig … style maker, prize winning designer and legendary visionary.  A man with precision superlatives !

The Sydney Gay and Lesbian Program in all its tangerine glory is available at http://www.mardigras.org.au/