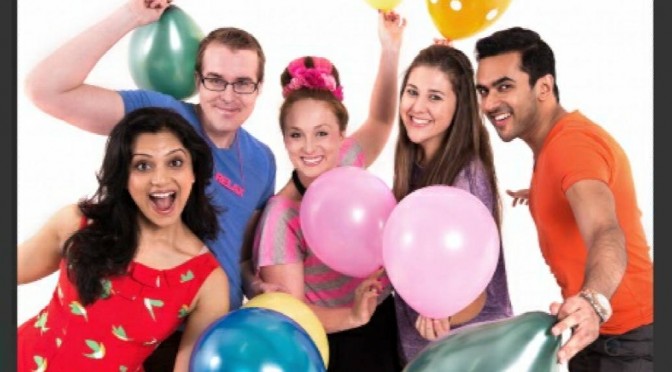 Now into its fourteenth year, Short+Sweet Theatre is set to provide yet again an exciting array of plays from different writers, directors and actors – both experienced and new. This year over 160 new scripts will be performed at two venues. As in previous years the festival is divided into two divisions, Top 80 and Wildcards. Showcasing twenty different plays across these two programs each week the only requirement is the plays be  10 minutes or less.

Week One Top 80 was a highly entertaining evening with a good mix of strong scripts.

The program started with Something To Tell You written by Ashleigh Stathakis and directed by Victoria Vinson. With Isabella Rodriguez as Clare, Susan Geldart as Brenda and David Hines as Robert, a daughter has something important to tell her parents and they in turn have secrets of their own. This comedy focuses on how important it is to ‘put it out there’.

Next wasThe Photograph is directed by the writer Carol Dance. Friendship fades and the question remains will mateship endure? Dana Heatley, David Hov and Luca Bale star in this moving play about the importance of mediation and healing old wounds.

The third play, Date Night,  written and directed by Sonal Moore, explores what can go wrong on a date night after 20 years of marriage. Rosie, played by Wendy Morton, and her husband Tom, Alan Long, face a crisis in this very funny story which has a great final few lines.

Next up was Wish by Bookie Robertson and directed by Rebecca Wright. The play stars Christian Heath as Jack Grant, a celebrity, and Ally Morgan as Stephanie Anderson, a young dying girl whose ‘Make A Wish’ wish isn’t exactly what is expected and leads to a roller coaster of emotion.

The final play before interval was Choose devised, narrated and directed by Sam Jenkins. This was the most risky of the evening’s plays as it relied on an audience volunteer to be the only actor. Each night is different as the decisions of the actor take the audience & the narrator in different directions. It’s a heap of fun and worth discussing with someone who saw a different version on another night.

We then go back in time with Wherefore Art Thou Oh Writing Inspiration, written by and starring Jeffrey Hampson as the playwright William Shakespeare. Directed by Courtney Powell, this play explores, in a humorous and clever manner, the source of his inspiration.

Afterwards by Alex Broun, and strongly directed by Natasha McDonald, is a serious piece dealing with the issues of abuse. In it, five women, Nicole Hardwood (Meg), Charlotte Baker (Sissy), Ash Shaw (Caroline), Imogen Furniss (Kendra), and Cynthia Ng (Jenny) reveal their individual yet united stories as they recount their experiences of abuse, in the hope of encouraging other women to do the same.

A change of mood brings another comedy It’s A Bumpy Ride written by Kellie Eatock and directed by Felix Carlyle. This play follows a young professional Emma, Hannah McLean, on a flight home to her mother’s wedding with a horror passenger next to her. There’s a surprise in store and a fun ending when she realises who the “Guy” played by Luke Berman really is.

The final play of the evening is Derrick The Fat Man. In a future world a reporter, Sarah Foukas, announces the President has introduced an Act to eliminate obese people, so Derrick, David Wiernik and Saul, Danny Nercessian, helped by their Mum, June Holmes, have their work cut out for them to achieve the appropriate weight.

Sets are necessarily fairly minimal to allow quick changes between plays, yet in all cases they were effective and appropriate. Likewise lighting effects were limited but were effective, highlighting different stage areas and actors or changes in scenes.

Adding to the entertainment is that at the end of the evening the audience gets to vote for their favourite two plays. Along with official judges these votes determine the winners of each week who then go into the final to be held on 27th and 28th March.

Short+Sweet is an excellent opportunity for writers, producers and directors to get their work on stage and provides audiences with a taste of many different styles and stories. Highly recommended and once you’ve been to one program you are sure to want to see another.

More details on the programming can be found on the SHORT+SWEETwebsite:http://web.shortandsweet.org/festivals/shortsweet-theatre-sydney-2015