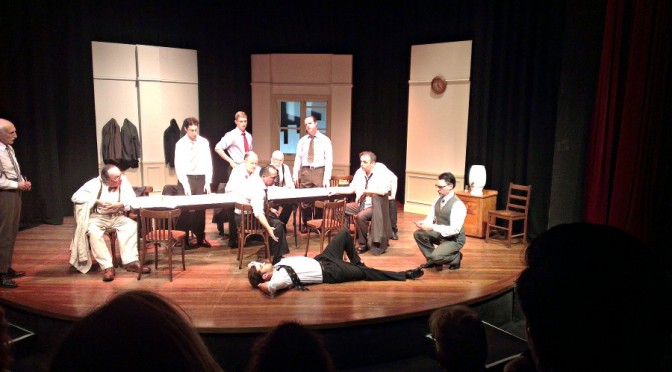 The audience gets to experience what it is like to be inside the jury room. (Rose wrote the play, inspired by his experience as a jurist in a manslaughter trial). The jurors, all male, become acquainted with the personalities of each of their peers, with their personalities, in many ways, being defined by their professions.

Eleven of the jurors are quick to condemn the accused, a teenage boy, with no discussion.

Juror 8, however, has other ideas. He has deeply considered his verdict and has reasonable doubt.  He grasps the mantle and takes on the onerous task, of turning the other jurors heads around.

Unlike the lawyer for the accused, Juror 8 presents questions that need to be answered, and is an impassioned advocate for reasoning out and testing all of the evidence.

The dramatis personae is completed by Brent Sheridan off-stage in the role of the Judge, and James Graham is the Court Guard.

What comes out during the course of the play is how many of the jurors discriminate against the accused and two of the witnesses on so many grounds – race, age, gender, history, background, neighbourhood  –  and how issues in jurists’ private lives can cloud their judgment.

Recommended, EpicentreTheatre Company’s production of TWELVE ANGRY MEN, opened at the Zenith Theatre, on the corner of Railway and McIntosh streets, Chatswood on Friday 31 October and is running until Saturday 8th November,