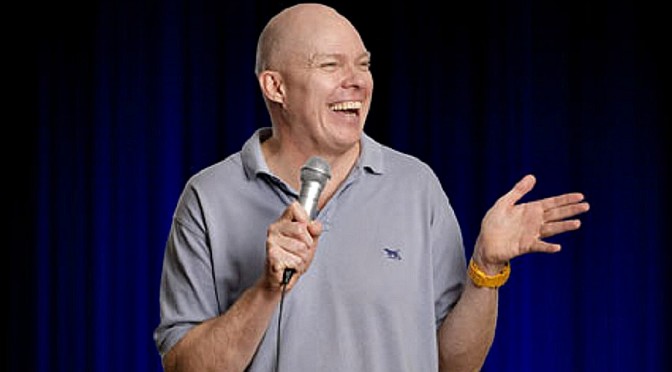 The Hive Bar in Erskinville is a lounge room type venue with a lounge, bench seats and chairs with cushions and delivered pizza from the kitchen downstairs. Just the type of room one would want for some intimate comic entertainment. With back to the window, warm up comedian, CJ Delling and main act, Sean Morahan stand behind a microphone that is a metre away from many of the audience. Given Sean’s impressive height, one could easily be intimidated, but the down the front seats were the best. Some chose to hang further back, but were warned that playing the video game during the routine would be considered a “heckle”.

We were given a warm up by German comedienne, CJ Delling who loves to collect Customs information forms from all around the world. After initial envy about the inference of how global her life is, the Customs instructions and specifications that she has collected definitely provide fuel for comic interpretation. While Australia is more worried about fruit, some countries attitudes towards importing chainsaws and sperm is interesting and suitably bizarre when given the clever comic treatment by CJ.

Although titled 1 LINER, Sean Morahan’s act is far from a series of 1 liners, thank goodness. The old vaudevillian tradition of punch-line gags and the mother in law and wife jokes is well and truly in the past as contemporary comedians mine their personal experiences and wry observations to pass comment upon our world. They also understand the old axiom, “in order to make them cry you have to make them laugh”.

We don’t cry, but some of the philosophical musings behind the act have serious history and content. Refugees and asylum seekers, Australia’s involvement in wars to support American interests, the significance of war memorials and the absurdity behind motor car racing on circuits are all given a comic treatment that is engaging and demonstrates the type of intelligence and enquiry that makes a worthy contemporary stand-up comedian. Laughter is a powerfully persuasive tool in stimulating debate and raising awareness.

Sean commenced his act with a few 1 liners and this caused some initial concern but he then launched into the structural coherence of introducing ideas, expanding on them, shelving them and then bringing them back to tag another topic, a technique we love and appreciate as we travel on the 55 minute journey of observation and personal experience. There were nerves and a few moments of searching for segue, but he relaxed and really started to enjoy himself after the first couple of stories elicited appreciative laughter.

Sean’s decision to try his luck as a comedian started when his career as a salesman trainer ended with redundancy early this year. He uses his experiences as a salesman and a clerk in a prestige car firm for the early part of his routine and many can identify with the comments on middle and upper management and the propensity of fellow office dwellers to steal from another desk rather than go to the store cupboard.

His tale on how he dealt with the purloining of envelopes from his desk sets us up for appreciating his clever and unique way of dealing with the otherwise annoying or frustrating behaviours and attitudes of fellow co-workers. Don’t get angry, get creative. He also gave an interesting insight into how some remote rural prestige car dealerships are established. Who’d have thought? Worth going along just for that little nugget of a story.

Leading on from that was the concept of mind mapping and his musings on what he termed “The Spectrum”. Nothing to do with Autism, this is his image of how everything that is seemingly polar opposite on your mind spectrum all end up in a curve that almost meets, extremes coming together. Heady philosophical stuff, food for thought presented in a gentle, perceptive and comic way.

He kept the tough stuff for last – his musings on racism, bigotry and xenophobia, the plight of refugees and Australia’s involvement in wars that support American interests. Tough issues, but Sean stayed on the PC path and still managed to create humour amidst the keen observations.

Sean’s is very insightful and intelligent and he comes across as a person that would be great to hang about with, seeing the world through his eyes. Structurally and topically, he knows his craft and with increasing confidence his gentle, wry, and quirky manner will engage and entertain many a happy audience.